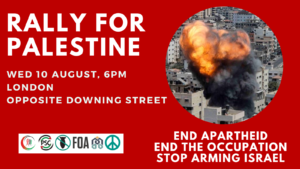 10 August 2022 / London, Opposite Downing Street
End Apartheid. End the Occupation. Stop Arming Israel.
Last week Israel once again launched a bombing campaign of the besieged Gaza strip. Over 3 days it killed at least 44 Palestinians, including 15 children. More than 300 Palestinians have been wounded and hundreds more displaced.
Although a ceasefire is now in place, Palestinians are still facing the reality of Israel’s ongoing project of colonisation and ethnic cleansing. The occupation of Gaza, East Jerusalem and the West Bank is in its 55th year, and Israel continues to intensify its grip, increase illegal colonisation of the land in defiance of international law, and deny Palestinians their right to self-determination.
This last week, as the bombs fell on the Gaza strip, the Israeli government facilitated the storming of Al Aqsa by dozens of Israeli settlers.
The effects of Israel’s 15-year suffocating land, air, and sea blockade leave Gaza’s medical facilities at breaking point, and Palestinians without the resources to reconstruct their homes and properties after facing Israel’s recurring campaigns of terror.
From the river to the sea Palestinians live under a single structure of oppression that denies them freedom and equality, and has been confirmed by leading human rights organisations, including B’tselem, Human Rights Watch and Amnesty International, as meeting the legal definition of the crime of apartheid. The majority of Palestinians remain in exile, denied the implementation of their right, enshrined in international law, to return to the homes from which they and their families were expelled in 1948 and 1967.
Despite Israel’s ongoing oppression and violations of international law the British government continues to license weapons and military technology to Israel. Between 2015 and 2020, the British government licensed at least £400million worth of arms to Israel.
Last week, not only did the Foreign Secretary and potential PM Liz Truss support Israel’s actions, she also confirmed her intention to increase trade with Israel, consider moving the British embassy to Jerusalem in defiance of international law, and bring in an anti-BDS law.
The bombs may, for a minute, have stopped falling on Gaza, but the injustice continues.
Palestinians need us to stand in solidarity, to protest, and to take action.
Join us as we demand:
End Apartheid
End the Occupation
Stop Arming Israel
Called by: Palestine Solidarity Campaign, Friends of Al-Aqsa, Palestinian Forum in Britain, Stop the War Coalition, Campaign for Nuclear Disarmament, Muslim Association of Britain
We use cookies to give you the best experience on our website. To learn more, please visit our Privacy Policy. By continuing on our website, you accept the use of cookies and our revised Privacy Policy Accept
Privacy & Cookies Policy