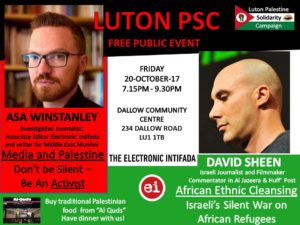 Join Luton PSC for this event with David Sheen, an independent journalist and film maker born and raised in Canada, now living in and reporting from Israel. Sheen began blogging when he first moved to Israel in 1999, and he later went on to work as a reporter and editor for the Israeli daily newspaper Haaretz.

Asa Winstanley, associate editor with The Electronic Intifada, an investigative journalist who lives in London. He first visited Palestine in 2004.