A discussion with Prof Karma Nabulsi and Dr Bernard Regan

A Palestine Solidarity Campaign webinar, discussing the impact and legacy of Britain’s policies in Palestine, from the Balfour declaration, during the Mandate, the Nakba, and until today.

Prof Karma Nabulsi is a Palestinian academic, organiser and author, and Patron of the Palestine Solidarity Campaign. Karma is currently Professor of Politics and International Relations at Oxford University, and Fellow in Politics at St Edmund Hall, Oxford.

Dr Bernard Regan has been publicly campaigning in support of the rights of the Palestinian people to self-determination since 1982, for much of that time as an executive member of the Palestine Solidarity Campaign. He also served for twenty-five years on the National Executive of the National Union of Teachers. He gained his PhD in 2016 and is currently a Visiting Research Fellow at St Mary’s University in the Department of Arts and Humanities.
Bernard is the author of The Balfour Declaration: Empire, the Mandate and Resistance in Palestine – an account of the imperial rivalries between Britain, Germany and the Ottomans, exposing British policy in the region during the Mandate period, as part of a larger geopolitical game: https://www.versobooks.com/books/2821-the-balfour-declaration 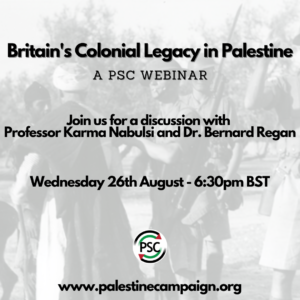