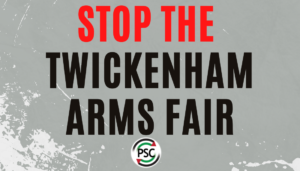 The International Armoured Vehicles 2023 arms fair is scheduled to take place at Twickenham Stadium from January 23-26.

At the fair, delegations from human rights abusing states, including apartheid Israel, will meet with representatives from a range of global arms companies, including those whose products have been used by Israel in its militarised repression of Palestinians.

Over 2500 people have written to the Rugby Football Union, the owners of the stadium, calling on it to revoke permission for the fair to use its venue. Despite this, the arms fair is going ahead.

Join Richmond & Kingston PSC and other local groups to show that the arms fair isn’t welcome.

Find out more about how you get can involved in the local campaign against the arms fair below: