The protest will end at 5.30pm, to give those who need to go home for Iftar time to do so.

Israel has also been conducting large-scale arrests in raids across the occupied West Bank, and has issued demolition orders on Palestinian homes as a form of collective punishment. It justifies this in the name of security . But the reality is, that what the mainstream media is describing as an ‘escalation of violence and conflict’ is Israel employing the severe violence required to enforce an illegal occupation and a wider system of oppression. Leading human rights organisations including Amnesty International, Human Rights Watch, and B’Tselem have rightly described this system as meeting the legal definition of the crime of apartheid.

Political leaders in the UK have chosen to remain silent about Israel’s actions, whilst elsewhere thy trumpet their opposition to illegal invasion and support for international law.   Moreover, the UK Government continues to regularly approve military technology and arms exports to Israel, including for weapons of the type used in clear violation of international law, against its own arms export criteria. The UK must stop arming Israel and providing material support for Israeli apartheid.Join us to protest on Friday 22nd April, against Israel’s actions, to call for the dismantling of apartheid, for an end to the violation of Al Aqsa, and for the UK government to Stop Arming Israel Apartheid. 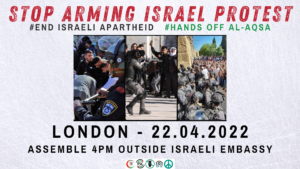