Home / Events / Protest: Stand up for Gaza – Stop the Killing

Protest: Stand up for Gaza – Stop the Killing

Protest: Stand up for Gaza – Stop the Killing

Join our protest in solidarity with Palestine after 70 Yeas of Nakba and with the Great March of Return, calling for justice, equality and the implementation of the right of return. 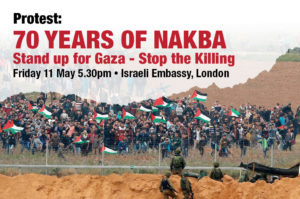