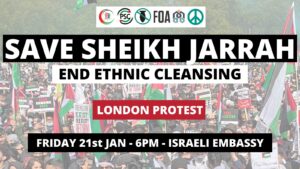 FRIDAY 21ST JANUARY 2022 // ISRAELI EMBASSY, LONDON, W8 4QB // 6PM
At 3am on Wednesday 19th January, Israeli security forces raided the Salhiya family house in Sheikh Jarrah, arresting and injuring multiple family members. After the family, who have lived in the house since 1956, refused to be evicted, Israeli troops barricaded then stormed their home at 3am.
Yasmin Salhiya reports that soldiers beat her 9 year old sister and aunt, who is now unable to move from her injuries, before destroying the family’s home. By dawn, only the rubble remained.
Over 1500 Palestinians currently live under the threat of home demolitions in occupied Jerusalem. In May of last year, Sheikh Jarrah was the flashpoint from which began the most significant period of protest in Palestine for a generation, now known as the Unity Intifada.
Israel believes that now, whilst the world’s attention is turned away, it can evict the Sheikh Jarrah families one by one. But Palestinians are coming together to resist this threat of ethnic cleansing, just as they did last May.
Meanwhile, Israel continues to violently arrest Palestinians in the Naqab protesting a campaign by the Jewish National Fund that threatens the livelihood of Bedouin communities in the area and that has been razing Palestinian land and uprooting Palestinian trees.
These continued violent acts of ethnic cleansing cannot continue. We must support their grassroots resistance by demanding our own Governments hold Israel accountable for its actions that amount to the crime of apartheid. It’s time to mobilise for Palestine once more.
Join us on the streets #EndEthnicCleansing ##SaveSheikhJarrah #SaveAlNaqab
We use cookies to give you the best experience on our website. To learn more, please visit our Privacy Policy. By continuing on our website, you accept the use of cookies and our revised Privacy Policy Accept
Privacy & Cookies Policy