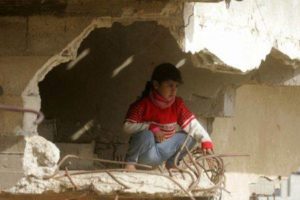 On 26th August 2014, Israel agreed to end the bombing of Gaza. In the previous 50 days, Israel’s elaborate bombing of Gaza had resulted in over 2,200 Palestinians were killed, over 500 of them were children. Over 20,000 Palestinian homes were destroyed during the 50 days of bombing of Gaza by Israel, the most heavily armed state in the region. While, Gaza was bombed Britain contnued to supply military equipment to the Israeli regime despite public protest against Arms trade with countries in violation International law. UK government since 2008 has granted licences .worth £434 million. HSBC owns shares in military and technology companies that sell weapons and equipment to Israel worth £ 831 million. The companies include BAE and Rayheon. Additionally, HSBC provides loans to companies like Caterpillar that supplies Israel speical caterpillars used to destroy Palestinian homes in Israel.

We will be demanding the end of British complicity in the Israeli crimes against Palestinians.

Please Join us and invite your friends to be there, visit our Facebook page.