Join us on 17th January for our screening of Epicly Palestine’d: The Birth of Skateboarding in the West Bank, a documentary that follows the rise of Palestine’s skate scene.

This will be followed by a Q+A, focused on the impact the occupation has had on the children of Palestine, ​and the supportive subculture that has emerged through skateboarding. We will be joined by Theo Krish, the director of Epicly Palestine’d, and Dani Abulhawa, a Skatepal ambassador and an academic focusing on skateboarding, gender and politics.

The event will host a photography exhibition, featuring photographs of Palestine by Mouna Kalla-Sacranie, and of its skate culture by Sam Dearden.

This event is organised by The People’s Film C​lub, ​a group ​which unites powerful documentaries with the speakers and activists who understand those issues best.
Doors – 7PM
Screening – 8.15PM

SkatePal is a non-profit organisation that works with communities throughout Palestine to enhance the lives of young people and promote the benefits of skateboarding.

Tickets can be purchased here: 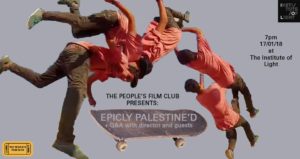