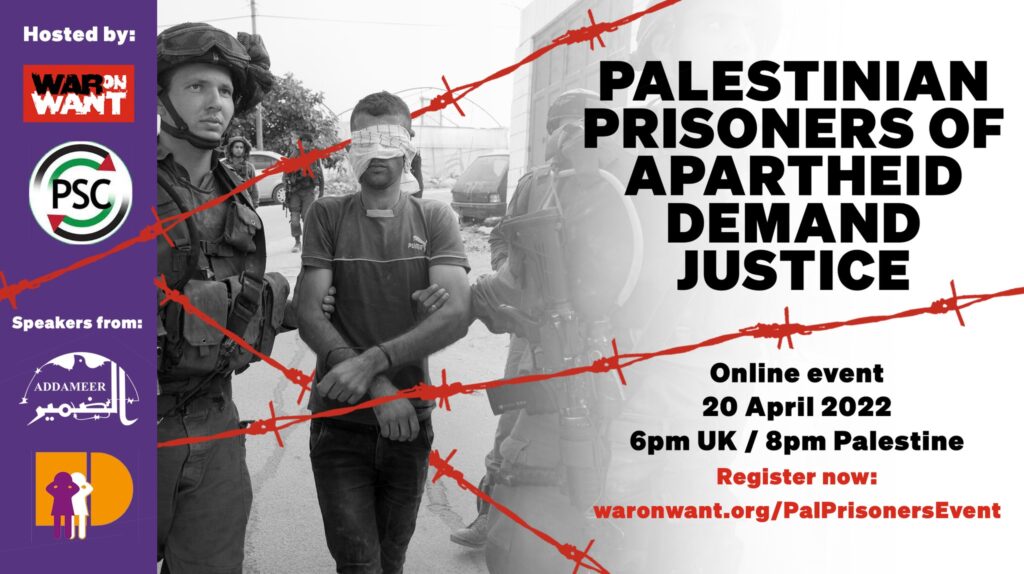 REGISTER HERE
Chair:
Ryvka Barnard, Deputy Director, Palestine Solidarity Campaign
Speakers:
Milena Ansari, International Advocacy Officer, Addameer
Ayed Abu Eqtaish, Accountability Program Director, Defence for Children International-Palestine
Chi-Chi Shi, Senior Campaigns Officer-Militarism & Security, War on Want
Time: 6 PM-7 PM UK/8 PM-9PM Palestine
Palestinians are demanding freedom and justice for political prisoners held by Israel’s occupation and apartheid regime. Join us on 20 April to hear directly from prisoners’ rights advocates in Palestine about the prisoners’ struggle for justice and the wider movement for Palestinian freedom and self-determination.
Israel’s system of arrest and detention is central to its occupation and apartheid regime. Thousands of Palestinians are held as political prisoners, including hundreds held in administrative detention without charge or trial. Palestinian children are not spared this injustice; hundreds are arrested each year. Israel uses arrest and detention to shut down dissent, target Palestinian human rights defenders, and persecute Palestinians over their opposition to apartheid.
Each year, Palestinians mark 17 April as Prisoners Day, to honour and uplift the prisoners’ call for justice, as a part of the broader Palestinian struggle. This year, in the face of mounting Israeli repression, prisoners have stepped up the demand for their rights; they’ve launched a collective boycott of Israel’s military courts, in protest over the widespread and illegal practice of administrative detention.
Join us to learn more about Israel’s regime of arrest and detention and how we can support Palestinian political prisoners’ demands for justice.
Sponsoring Organisations: Palestine Solidarity Campaign and War on Want
We use cookies to give you the best experience on our website. To learn more, please visit our Privacy Policy. By continuing on our website, you accept the use of cookies and our revised Privacy Policy Accept
Privacy & Cookies Policy