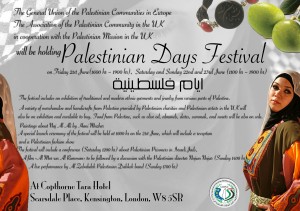 Past audiences will expect some surprising festival inclusions this year with the special features on offer. Held at London’s Copthorne Tara Hotel between 21 and 23 June, the festival’s schedule runs as follows: 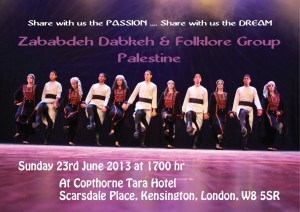 Sunday June 23: Exhibition, film screening and musical performance 1100-1700: Exhibition opening hours (Showcasing same as above) 1400: Screening of “Pomegranates and Myrrh”, a film by Palestinian director and screenwriter Mrs. Najwa Najjar. The screening will be followed by Questions and Answers session with the director. 1700: A live performance by Al Zababdeh the Palestinian traditional dabkeh group.

Looking forward to welcoming you at the festival. The Executive Committee of the Association of the Palestinian Community in the UK.