Home / Events / Open Bethlehem: a film followed by Q&A with the director

Open Bethlehem: a film followed by Q&A with the director

Open Bethlehem: a film followed by Q&A with the director

Renowned Palestinian film-maker Leila Sansour is coming to the Showroom Cinema on Sunday 12th April to attend a showing of her highly acclaimed film ‘Open Bethlehem’ and to conduct a Q&A session after the film. Since its launch in London, hosted by Melvyn Bragg, the film is being shown around the UK before being launched later this year in the United States.

“For most, Bethlehem is myth. For me, it is home and a real place right in the heart of the Middle East. A little town currently fighting for survival. Every day more of Bethlehem is being lost. This is all people talk about in town. All of us want to see Bethlehem open again”, says Leila. 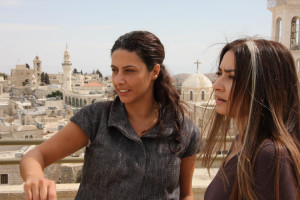 The film we be shown as part of the ‘Eye Openers’ scheme at the Showroom Cinema on Paternoster Row at 3.30pm on Sunday 12th April followed by a Q&A session with the film’s Director Leila Sansour. A link to tickets can be found at http://www.showroomworkstation.org.uk/open-bethlehem