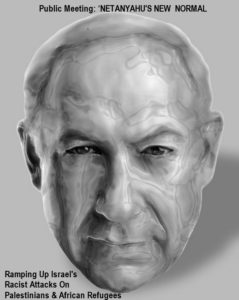 With far-right governments in power in both the US and Israel, it’s time to examine the latter’s racist attacks against indigenous Palestinians and African asylum-seekers.

An unflinching look at Israel under Netanyahu serves as a primer on his racist playbook – one which  reactionaries on both sides of the Atlantic seem keen on copying.

Can people of conscience help roll back the rise of the racist right, around the world and in Israel and Palestine?

Independent journalist David Sheen has been reporting from inside Jewish Israeli society since 2010, focusing on racial conflict and religious extremism.

Sheen’s articles and videos for Ha’aretz, Alternet, Electronic Intifada and other news sites have been critical to exposing the sad situation on the ground,while his presentations at dozens of college campuses and European parliaments have helped communities mobilize  in response.