For coaches coming from around the country please click here.

For the past 100 years Palestinian rights have been disregarded. As we approach the centenary of the Balfour Declaration – on the 2nd November – which built the path for their dispossession, we are demanding justice and equal rights for Palestinians now.

Join us on Saturday 4 November to make it right for Palestine!

Speakers at the rally will include: 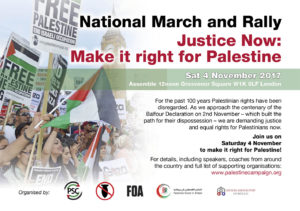