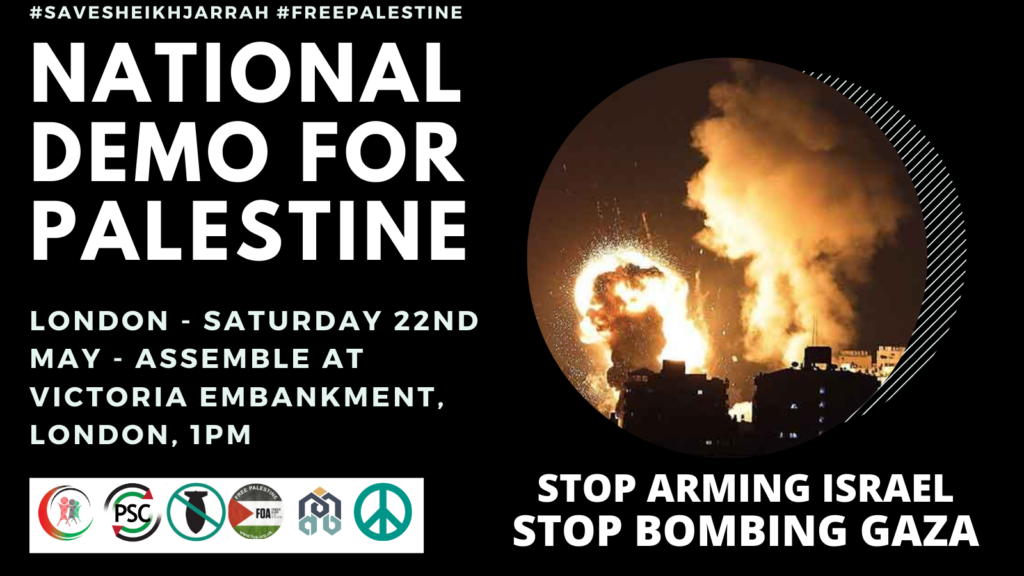 IMPORTANT: If you have coronavirus symptoms do not attend the protest. Wear a mask, use hand sanitiser, keep social distance.

Israel is relentlessly bombarding the population of beseiged Gaza, many refugees from Israel’s ethnic cleansing of Palestinians in 1948. So far, more than two hundred Palestinian civilians have been killed, including children.

In addition, Israel is pushing ahead with attempts to ethnically cleanse Palestinian families from their homes in Sheikh Jarrah, occupied Jerusalem. The plans to forcibly dispossess the families is part and parcel of Israel’s attempt to alter the demographic balance of the city, by ethnically cleansing Palestinians, while simultaneously providing financial and political support for illegal Jewish-only settlements built on stolen Palestinian land.

As Palestinians protest in Jerusalem against these evictions, and Israel’s ongoing programme of ethnic cleansing, Israeli forces have responded with brutality, including an assault on worshippers at Al Aqsa Mosque.

In Israel itself, Palestinian Citizens are being subject to violent armed mobs, attempting to drive them from their homes.
This violence is part and parcel of Israel’s regime of institutionalised racist discrimination against the whole of the Palestinian population, amounting to the crime of apartheid.

The UK government must take immediate action and stop allowing Israel to act with impunity. It must demand an end to current proceedings to evict these families, and start holding Israel accountable for all its actions ,which contribute to the crime of apartheid.

This includes through implementing sanctions, including an immediate military embargo to cut the supply of deadly weapons to Israel, and banning the import of goods from Israel’s illegal settlements.

In the face of Israel’s brutal crimes, we can’t remain silent, we must remain on the streets!
Come together on the streets to demand our government sanction Israel now!