Join us to demonstrate against 74 years of Nakba = Exist, Resist, Return!!

Last year hundreds of thousands marched through the streets of London, and around the country, in solidarity with Palestinians and to protest against Israel’s bombardment of Gaza and continued ethnic cleansing in East Jerusalem.

There is a growing consensus across civil society, confirmed last year in reports from B’Tselem (Israel’s leading human rights organisation), Human Rights Watch and Amnesty International in acknowledging what Palestinians have been saying for decades: that Israel is practicing the crime of apartheid. There is a responsibility on the global community to respond to this reality by holding Israel to account and push for an end to the oppression of the Palestinian people.

74 years ago, Zionist forces ethnically cleansed and eradicated over 500 villages and cities in Palestine, displacing over 750,000 Palestinians, and taking over 78% of the land of historic Palestine. Known as the Nakba, or catastrophe in Arabic, this forced displacement was the basis for the foundation of the Israeli state.

The Nakba continues today. From Jerusalem to Gaza, via the Naqab, Israel continues its policy of apartheid and ethnic cleansing, displacing and oppressing the indigenous Palestinian population. While Palestinians living in exile, uprooted by Israel, are denied their right of return, a right enshrined in international law. 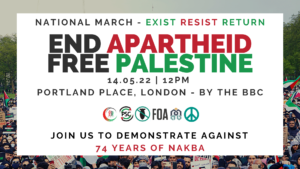