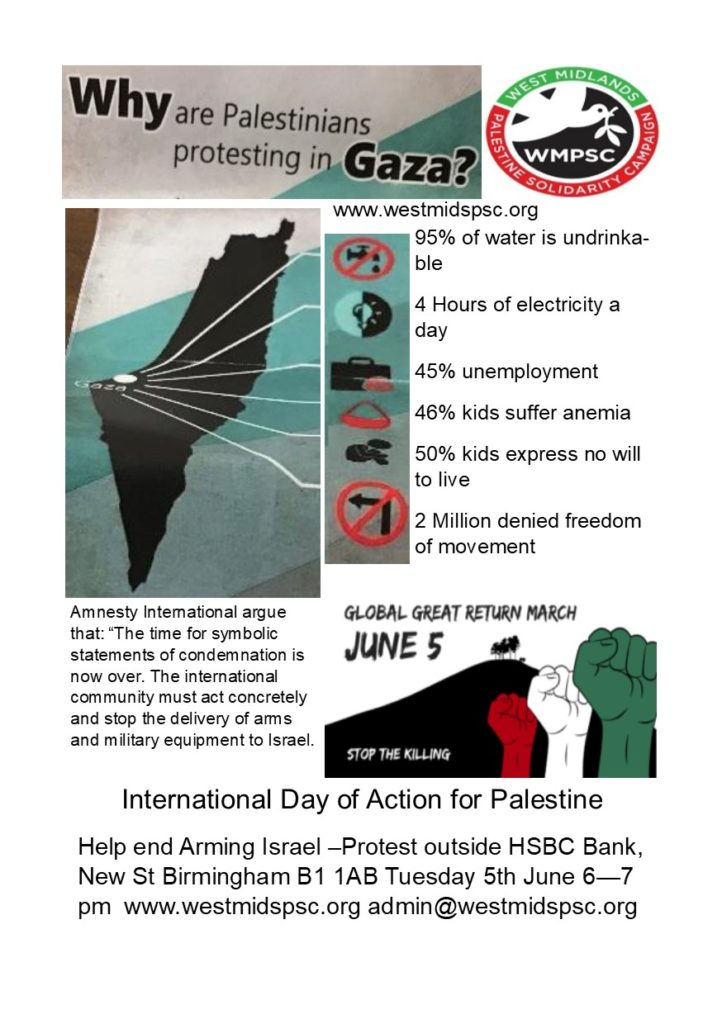 On the 14th May Israel massacred 60 Palestinians, among them 8 children, and injured a further 2,400, including 200 children. This came as Palestinians marked the 70th anniversary of Nakba – when they were ethnically cleansed from their land – and protested against the US embassy move to Jerusalem.

For the last 7 weeks Palestinians have been gathering in Gaza to peacefully protest against the inhumane living conditions created by Israel’s illegal decade long blockade of the coastal strip, and also to reaffirm their Right of Return as enshrined by international law.

Israel’s siege on Gaza has triggered major socio-economic and health crises. 80% of the population are dependent on humanitarian aid to survive, and 42% of essential medicines are currently at zero stock. The UN warns that Gaza will be uninhabitable by 2020 unless urgent action is taken. As it stands, 97% of the water is not safe for consumption and there are electrical blackouts for around 16 hours each day. (PSC Gaza factsheet)

Over the last weeks, Israel has responded to Palestinians exercising their right to demonstrate with shocking violence. Having deployed snipers along the border, Israeli forces have been using live ammunition with deadly consequences. Prior to today’s bloody onslaught, Israeli forces had already killed at least 45 Palestinians and injured a further 6,400 since the 30thMarch. (PSC Great March or Return flier)

According to Human Rights Watch, “Israeli soldiers were not merely using excessive force, but were apparently acting on orders that all but ensured a bloody military response to the Palestinian demonstrations. The result was foreseeable deaths and injuries of demonstrators on the other side of a border who posed no imminent threat to life.”

The International Criminal Court prosecutor warned that Israel’s actions could lead to war crimes trials for Israeli leaders. But the international community has so far failed to take effective action, allowing Israel to continue massacring civilians with little or no consequence. Indeed, the UK continues to supply Israel with weapons despite the clear human rights violations being committed against Palestinians.

Amnesty International argue that: “The time for symbolic statements of condemnation is now over. The international community must act concretely and stop the delivery of arms and military equipment to Israel. A failure to do so will continue to fuel serious human rights abuses against thousands of men, women and children suffering the consequences of life under Israel’s cruel blockade of Gaza. These people are merely protesting their unbearable conditions and demanding the right to return to their homes and towns in what is now Israel.”

Join us in writing to Members of Parliament using our template letter, and call on the British government to:

– Use its influence to demand an emergency meeting of the UN Security Council and an independent investigation into Israel’s actions.

– Take immediate action to end the illegal siege of Gaza and alleviate the suffering of its population.