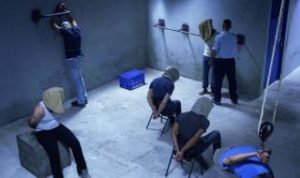 Director Raed Andoni seeks out former detainees of an infamous Israeli interrogation centre to help him construct a replica of their former prison as the backdrop to a cathartic and challenging roleplay where the men re-enact their real-life experiences.

The layout of the set is based on the men’s sketchy memories of the interrogation rooms and cells where they spent most of their time blinfolded. As the walls of the prisons are raised, they force long repressed emotions and trauma to the fore, confronted again with the humiliation they experienced while detained. The men start to lose trust in Andoni as they are pushed to extremes and his motives for the method are called into question.

A visceral exploration of memory, trauma and the role of power.

Director Raed Andoni will join us for a Q&A via Skype, following the screening.