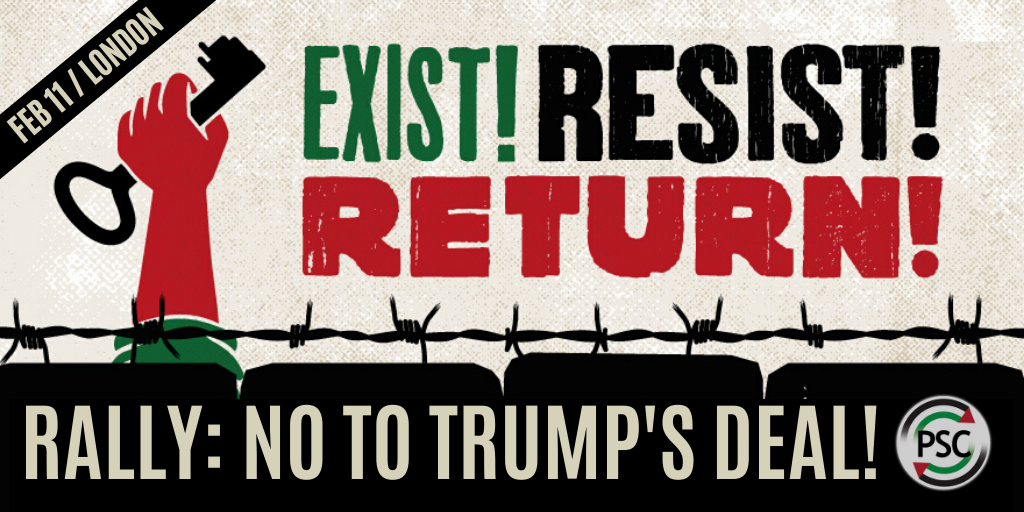 Donald Trump’s so-called “deal of the century” represents not a deal for peace, but a demand to the Palestinian people to surrender their fundamental rights, sugar-coated with the illusion of economic prosperity.

This vision means no viable state for the Palestinians but a series of Bantustans, no capital in Jerusalem, instead sovereignty over the outlying districts of East Jerusalem, and no right of return for the Palestinian refugees. The deal does not even attempt to pay lip service to international law. Instead Israel is given the green light to annex further swathes of the West Bank, which the US would then recognise.

The message from Trump and Netanyahu, underpinned by a racist colonial mindset, is that they do not regard Palestinians as a people with core collective rights, but simply as individuals with economic needs.

Whilst Palestinians want to prosper and live ordinary lives in common with people across the world, they know that they cannot do so until Israel’s illegitimate control over their lives is ended. They seek liberation; not to be made more comfortable in their chains.

There is no deal which is acceptable that is not rooted in respect for the rights of all and for international law. Trump’s deal fails on both counts and it must be rejected by the UK Government, whose response to the deal so far is wholly inadequate.

Whilst not endorsing the deal, giving it any sort of “welcome” runs counter to the UK Government’s stated commitments to uphold and implement international law, and reinforces decades of complicity through action and inaction by successive UK Governments.

Join us for a rally featuring Palestinian voices, politicians, trade unionists and campaigners as we defend the collective rights of the Palestinian people and say NO to Trump’s deal.