Frome Friends of Palestine are proud to announce the opening of an important and innovative exhibition that puts the town at the heart of history.

The exhibition will be at the Silk Mill Gallery, and will run from Wednesday October 18 until Tuesday October 31. Hours 11am – 7pm, admission free.

There will be a simple cafe, and a range of interesting things to do as well as things to look at.

“From our next bivouac we could look across miles of ground and see the town of Gaza in the distance. This looked a very nice place, there was plenty of green about it. The houses painted white showed up with the tall mosque in the centre of it. We were near and yet so far from it, and in the space between some thousands of lives were to be lost. We were in the second battle of Gaza, and it was pretty hot stuff. The guns were going at it all day long, and it was a perfect din. But still Gaza remains in the distance.”

These words were written 100 years ago by a Frome man called Corporal Frank Phillips. He grew up at Badcox, where his parents ran the Swan Inn, and before he went to war he’d been a printers’ reader at Butler and Tanner. In 1917 he was a medical assistant, serving with the [SLI] in Palestine, and in November he was killed by a direct hit from a shell.

Frank was one of many people with Frome connections who were caught up in Britain’s thirty-year occupation of Palestine. Huge numbers of British people served there – well over 100,000 in 1946. A lot of peoples’ lives were touched by the experience. This autumn marks the centenary of two major events: the signing of the Balfour Declaration, and the British conquest of Jerusalem. We’re using these anniversaries to tell the story of Britain’s time in Palestine, with the emphasis on the lives and memories of people who had relatives that were involved in it. As well as photographs we’ll be displaying some interesting family heirlooms.

Wednesday October 18 – ‘A fateful enterprise: the “Balfour” letter and its consequences’

After the formal opening of the Frome in Palestine exhibition by Lord Oxford, whose father served in Palestine and features in the display, we’ll be having a talk by Dr Peter Shambrook. A specialist in Modern Middle Eastern history, Peter’s current research is focused on British government policy regarding the McMahon-Hussein Correspondence. He is Historical Consultant to The Balfour Project.

The 1917 Balfour Declaration is widely regarded as one of the most formative and far-reaching documents in the modern history of the Middle East. For Israelis, the Declaration was the foundation stone upon which the Jewish State was established in 1948, following the Holocaust. On the other hand, for Palestinians the Declaration was an immoral, colonial document which led directly to the destruction of Palestinian society and their dispossession in 1948. Dr Shambrook’s talk will cover the war-time context that led to the Declaration, the key players involved, the importance of the Declaration in British mandatory policy between 1923-1948, and the connection between the Declaration and Britain’s contemporary role in the ongoing crisis in Israel/Palestine.

Frome Friends of Palestine are renowned for their food so make sure you make this one. Music by Vicki Burke. More entertainment is promised. 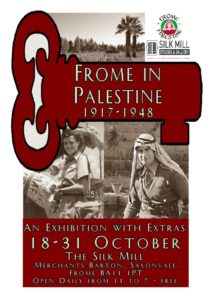