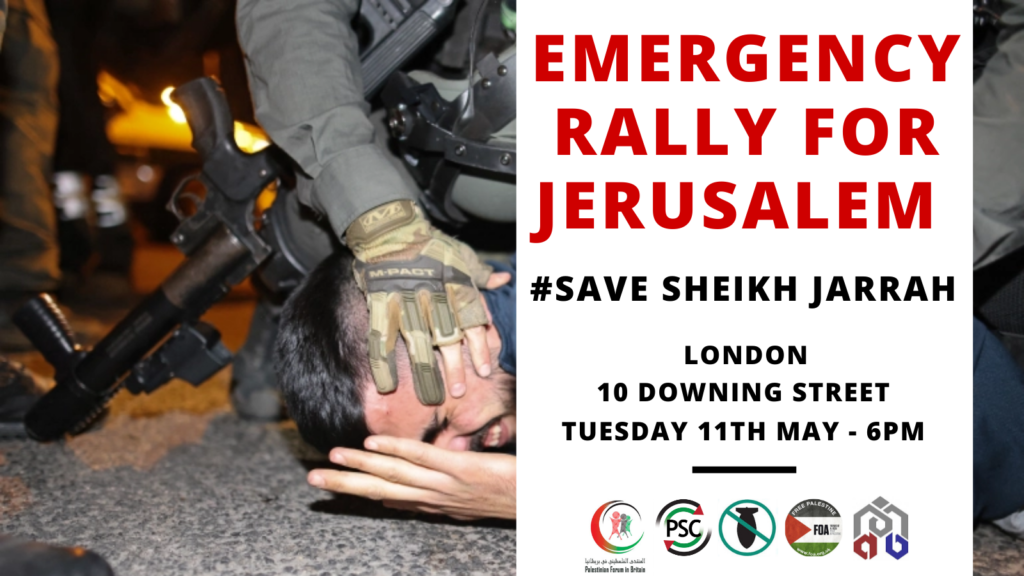 10 DOWNING STREET, SW1A 2AA // 11.05.2021 // 6PM
#SaveSheikhJarrah #FreePalestine
IMPORTANT: If you have coronavirus symptoms do not attend. Wear a mask, use hand sanitiser, keep social distance.
Israel is attempting to ethnically cleanse Palestinian families from their homes in Sheikh Jarrah, occupied Jerusalem. Four of the Palestinian families face the prospect of being evicted this week.
As Palestinians protest in Jerusalem against these evictions, and Israel’s ongoing programme of ethnic cleansing, Israeli forces have responded with brutality, including an assault on worshippers at Al Aqsa Mosque that has wounded hundreds.
Backed by the state and its discriminatory laws, settler groups have claimed ownership of the land in Sheikh Jarrah and implemented a creeping takeover of Palestinian homes, aided and abetted by Israeli courts and the security forces.
The plans to forcibly dispossess the families is part and parcel of Israel’s attempt to alter the demographic balance of the city, by ethnically cleansing Palestinians, while simultaneously providing financial and political support for illegal Jewish-only settlements built on stolen Palestinian land.
The UK government must take immediate action and stop allowing Israel to act with impunity. It must demand an end to current proceedings to evict these families, and start holding Israel accountable for all its actions ,which contribute to the crime of apartheid. This includes through implementing sanctions, and banning the import of goods from Israel’s illegal settlements.
In the face of Israel’s brutal crimes, we can’t remain silent! Come together on the streets to demand our government take action.
SAVE SHEIKH JARRAH, FREE PALESTINE!
We use cookies to give you the best experience on our website. To learn more, please visit our Privacy Policy. By continuing on our website, you accept the use of cookies and our revised Privacy Policy Accept
Privacy & Cookies Policy