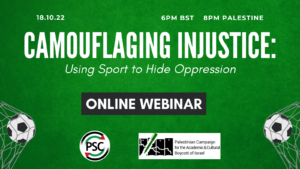 Hosted by Palestine Solidarity Campaign and the Palestinian Campaign for the Academic and Cultural Boycott of Israel (PACBI).

In just a few weeks, the FIFA World Cup kicks off in Qatar. Behind the polished image that FIFA, corporate sponsors, and the Qatari government will present, the World Cup has been built on the back of hyper-exploited migrant labour. The infrastructure that the tournament will rely on has been built by migrant workers forced by global capitalist exploitation into a system that exposes them to forced labour, unpaid wages, and brutal working conditions around the world. In Qatar, they will also be subjected to the coercive Kafala system.

The World Cup is symptomatic of a broader truth. Human rights abusing states use major sporting events to refashion their image – spending vast amounts of money to obscure their repression, and improve their reputation – in what is known as sportswashing. The cases are many.

Israel, for example, uses sporting events to falsely depict itself as a modern, sports values-respecting democratic state – attempting to obscure its regime of settler-colonialism, military occupation, and apartheid against Palestinians. Israeli government support brings in cherished international football teams for “friendly” matches. In professional cycling, the Israeli government-funded pro cycling team is explicit about its goal to enhance Israel’s standing in the eyes of the public – at a time when millions across the world are recognising Israel’s oppression of Palestinians.

Join this webinar to learn more about sportswashing, the role of dirty sponsorship money  – and how we can work to amplify the voices of those resisting repression and struggling for justice for all.

In Association Football, investment vehicles controlled by the repressive, dissent-crushing dictatorial monarchies of the Gulf have purchased entire clubs in the top French and English leagues. Putin-allied billionaires have also purchased major football clubs and NBA teams. In golf, the Saudi Public Investment Fund has spent billions to launch the LIV Golf Tour, which, with honourable exceptions, has attracted some of the world’s highest profile players – despite its role in sanitising the regime’s reputation. Military fighter jet “flyovers” have become the norm at US football matches. Elsewhere, massive sporting events like the Olympics have been used to squash dissent, and accelerate processes of gentrification.

These are all examples of a deliberate strategy to use sports to launder state images.

Corporations, on the other hand, lend legitimacy to sportswashing events and sporting bodies through sponsorship, regardless of human rights violations. While some corporations are distancing themselves from the World Cup in Qatar, the Carrefour supermarket chain has doubled down. German brand Puma sponsors the Israel Football Association, which advocates for, and governs on behalf of clubs in illegal Israeli settlements on stolen Palestinian land. Join this webinar to learn more about sportswashing, the role of dirty sponsorship money  – and how we can work to amplify the voices of those resisting repression and struggling for justice for all.

Shireen Ahmed (Chair) is a multi-platform sports journalist, a TEDx speaker, mentor, and an award-winning sports activist who focuses on the intersections of racism and misogyny in sports.

Abdullah Al-Arian is a professor of modern Middle East history. He is the editor of the recently published Football in the Middle East: State, Society, and the Beautiful Game (Hurst/Oxford University Press). He is also editor of the Critical Currents in Islam page on the Jadaliyya e-zine.

Jules Boykoff is the author of five book on the Olympics, including Power Games: A Political History of the Olympics. He teaches politics and writing at Pacific University in Oregon, USA. On Twitter: @JulesBoykoff.

Aya Khattab is a Palestinian footballer who plays for the Palestine women’s national team.

Nicholas McGeehan is a founding director of FairSquare Research and Projects. He is an investigator and leading advocate on migrant workers’ rights. He was a senior researcher at Human Rights Watch for five years, where he conducted research and advocacy on a wide range of rights issues, including work on abuses in agricultural supply chains and heat-related deaths in the construction sector.