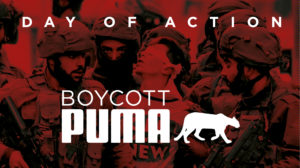 Last year saw an unprecedented eruption of solidarity with the Palestinian struggle for freedom, justice, and equality – as apartheid Israel escalated its violence against Palestinians.
As part of this solidarity, tens of thousands in the UK have joined 200+ Palestinian sports teams in demanding PUMA end its sponsorship of the Israeli Football Association. The IFA includes teams in illegal Israeli settlements on stolen Palestinian land, sustaining Israel’s ongoing dispossession of the Palestinian population.
Protests across the world are working. A leaked internal memo showed PUMA admitted its celebrity ambassadors and business partners are increasingly questioning its support for Israeli apartheid, while a PUMA lawyer told the campaign it was making their lives “miserable.”
We’ve got to keep up the pressure, and make 2022 the year PUMA ends its partnership with Israeli apartheid.
Join an action at a PUMA store or stockist!
List of actions:

Brighton: Meet at the Clocktower, 12pm