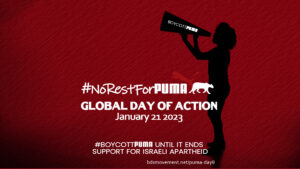 PUMA may have a new CEO, but it’s the same old story as far as its complicity in Israeli apartheid goes. PUMA is still ignoring Palestinian sports teams, and sponsoring the Israel Football Association, which governs for football teams in illegal Israeli settlements, on stolen Palestinian land.

PUMA sponsors the Israel Football Association, which not only governs teams in illegal Israeli settlements on stolen Palestinian land, it also actively advocates to maintain them, including via the corrupt FIFA.

PUMA is feeling the pressure from the global campaign. Just a few weeks ago the Oakland Roots Sports Club in California became the latest professional team – first in the US – to drop PUMA following a year of engagement with local grassroots groups and fan clubs. They join a host of football clubs, including many in the UK, who have severed ties with PUMA during the course of the international campaign.

Last year we pledged #NoRestForPUMA until it ends complicity in Israeli apartheid. We’re keeping that pledge.

Let’s send the new CEO a message. As long as PUMA profits from Israeli apartheid, we will continue to escalate our global boycott campaigns. Take action outside a PUMA store or stockist to demand PUMA ends its complicity in Israeli apartheid.

Coventry, JD Sports, The Precinct, 10am