Empire, the Mandate and Resistance in Palestine by Bernard Regan 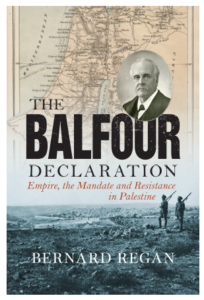 (Event details will updated when further information is available)

—————————————————————————————————–
The true history of the imperial deal that transformed the Middle East and sealed the
fate of Palestine. On November 2, 1917, the British government, represented by Foreign Minister Arthur Balfour, declared that they were in favor of “the establishment in Palestine of a national home for the Jewish people.” This short note would be one of the most controversial documents of its time. A hundred years after its signing, Bernard Regan recasts the history of the Balfour Declaration as one of the major events in the story of the Middle East. Offering new insights into the imperial rivalries between Britain, Germany and the Ottomans,Regan exposes British policy in the region as part of a larger geopolitical game. Yet, even then, the course of events was not straightforward and Regan charts the debates within the British government and the Zionist movement itself on the future of Palestine. The book also provides a revealing account of life in Palestinian society at the time, paying particular attention to the responses of Palestinian civil society to the imperial machinations that threatened their way of life. Not just a history of states and policies, Regan manages to brilliantly present both a history of people under colonialism and an account of the colonizers themselves.
—————————————————————————————————–
Reviews
“In this major account of the Balfour Declaration, Bernard Regan’s timely book sheds
light on the most powerful symbol of the official British-Zionist alliance over the last
century. It deserves to be widely read by those yearning for truth and reconciliation in
the Middle East.”
– Professor Nur Masalha, SOAS, University of London

“This is a meticulously researched account of the background and aftermath of a
transaction that launched in 1917 a malignant conflict that has poisoned the Near East
and the wider international arena ever since. Bernard Regan places the Balfour
Declaration in its proper context … It is compelling essential reading to anyone who
wishes to understand the roots of one of our world’s most dangerous potential
explosion spots.”
– Moshé Machover, author of Israelis and Palestinians

“Most have heard of the Balfour Declaration, without fully appreciating its history
and consequences. With this meticulous and insightful study, we have a fascinating
and timely guide to British colonial policy in Palestine, and its devastating impacts for
the Palestinian people to this day”.
– Professor Karma Nabulsi, Oxford University.

Bernard Regan completed his PhD at St Mary’s University and Surrey University in 2016 having studied with Professor Nur Masalha and Dr Claire Norton.  His research focussed on Palestine and the British Mandate between 1917 and 1936.  He is the author of “The Balfour Declaration: Empire, Mandate and Resistance in Palestine”. (Publication November 2017. Publisher Verso).

He returned to academic study after a career teaching in Primary, Secondary and Special Education.  He has also taught in Further, Adult and Higher Education and run education courses for trade unionists on international questions especially related to Palestine and Cuba.

Whilst teaching Bernard Regan was a member of the National Union of Teachers Executive Committee for 25 years and during that time took an especial interest in Government Education policies and in the Union’s international work. His international work in the Union centred on Palestine and Cuba and the development of Education within these countries.

He has written on the impact of Neoliberalism on Education policies in the national press and numerous journals.

He has led trade union delegations to Palestine and Israel, visiting schools, meeting students, teachers and Educational administrators.  He co-authored the 2006 policy of the Trade Union Congress on Palestine.  In 2008, along with Michael Kustow (former Commissioning Editor Channel 4 and director of ICA), he developed a series of initiatives entitled Another Israel aimed at giving space to the voices of dissident Israeli intellectuals and activists.

He is one of the Co-organisers and a contributor to the annual Latin America Conference which has now been held in London for the last 12 years.  The conference is recognized as the largest of its type in Europe and brings together contributors from Latin America, intellectuals, academics, activist/campaigners, students and trades unionists.  Amongst its contributors over the last 12 years have been Noam Chomsky, Harold Pinter, Ernesto Laclau, Aleida Guevara, Tariq Ali and ambassadors from Cuba, Bolivia, Nicaragua, Chile, Argentina, Venezuela.

He was the first recipient of the NUT’s Steve Sinnott Award for international work in 2015.