The Balfour declaration: The imperialist deal that tore the Middle East apart

On 2 November 1917, Foreign Minister Arthur Balfour wrote to Lord Rotschild a very short letter which gave away the land of the Palestinians to establish a “national home for the Jewish people” out of “sympathy with Jewish Zionist aspirations”. The British government had accepted the Zionist slogan that depicted Palestine as “a land without a people for a people without a land.”

With the breakup of the Ottoman Empire, Britain made a colonial land-grab. In the words of the first British military governor of Jerusalem, “a loyal Jewish Ulster” had been created.

Like many other acts of colonialism, its consequences have been brutal and continue today: Zionist settlers are expelling Palestinians, Israel is occupying much of the West bank, and there are over 6 million refugees and their descendants.

Bernard Regan, author of The Balfour Declaration, Empire, the Mandate and Resistance in Palestine, will explain the rivalries between Britain, Germany and the Ottomans, expose British policy in the region and explain the resis­tances of Palestinians.

Roland Rance, from Free Speech on Israel, will explain the intentions then of British government and of the Zionist movement for Palestine, and what is the continuity of their policy within Israel today.

The Balfour Declaration, Empire, the Mandate and Resistance in Palestine by Bernard Regan, Published by Verso, Hardback, £16.99 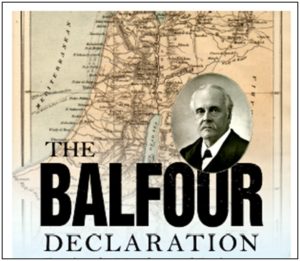