The Balfour Declaration: Empire, Mandate and Resistance in Palestine

Visiting Research Fellow at St. Mary’s University, Executive Member of Palestine Solidarity Campaign  and former Member of the Executive of the National Union of Teachers

A hundred years after its signing, Bernard Regan recasts the history of the Balfour Declaration as one of the major events in the story of the Middle East.

Update on action re: this centenary’s celebrations and updates on current campaigns

Approx. 6 mins walk from South Wimbledon tube station on the Northern Line and 10 mins. from   Wimbledon Rail Station. Buses 57,93,131 and 219 stop outside. 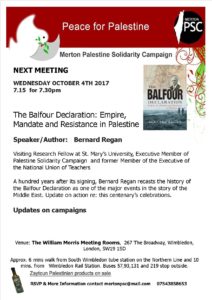