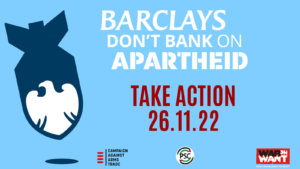 Keep the pressure on Barclays by taking action at a Barclays branch near you, and demand it #StopBankingOnApartheid.

On 1 October campaigners protested at 25+ Barclays branches across Britain to demand the bank halt its business ties with companies manufacturing weapons and military technology used by Israel in its militarised violence against Palestinians.

Since then, actions have been taking place at Barclays branches in towns and cities every week. We’ve made it clear that we won’t be going away, and we won’t just be ignored.

We’ll keep ramping up the pressure on Barclays to stop facilitating Israel’s regime of ethnic cleansing, military occupation, and apartheid.

That’s why we’re calling for coordinated actions at Barclays branches across Britain on 26 November, the Saturday before the UN Day of Solidarity with the Palestinian People.

Across Palestine and in exile, Palestinians are resisting Israel’s regime of oppression. They are calling for solidarity with their struggle against Israeli apartheid, including through campaigns to end the complicity of financial institutions like Barclays.

It’s up to us to keep demanding that Barclays #StopBankingOnApartheid.