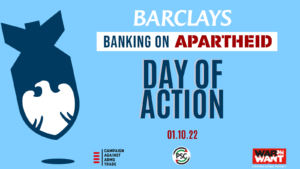 Take action at a high street Barclays branch near you: demand the bank stop investing in arms companies supplying Israel with weapons and military technology used to assault Palestinians.

Militarised violence against the Palestinian people is a central feature of Israel’s regime of settler-colonialism, occupation and apartheid. In August 2022, Israel once again bombarded the besieged Gaza strip, home to over 2 million Palestinians. The attack killed 49 Palestinians, including 17 children.

This violence is made possible because of Israel’s trade in arms with countries around the world, including the UK, and the complicity of companies and banks that continue to aid Israel’s violence – including Barclays.

Our research has uncovered that Barclays invests over £1billion+ in arms companies supplying Israel, as well as providing them with financial services. This includes investment in Israeli arms manufacturer, Elbit Systems. Elbit Systems specialises in the production of military technology, surveillance systems, and military drones – used to brutalise Palestinians in Israel’s repeated bombardments of the Gaza Strip.

Against severe repression, Palestinians continue to resist Israel’s apartheid and occupation regime. They are asking for our solidarity. Barclays is a household name in Britain, with branches on every high street. It is up to us to pressure it to stop facilitating Israeli violence towards Palestinians, and divest from Israeli apartheid.

Called by: Palestine Solidarity Campaign, Campaign Against Arms Trade, and War on Want.

Order leaflets, placards, and other resources by contacting info@palestinecampaign.org

Cardiff: Outside Barclays, The Hayes, 11am-1pm