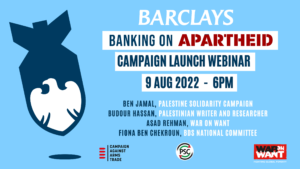 Militarised violence against the Palestinian people is a central feature of Israel’s occupation and apartheid regime – from the illegal Apartheid Wall to demolitions of Palestinian homes, to militarised and lethal repression of Palestinians protestors, and indiscriminate bombing campaigns of the Gaza Strip.

This violence is made possible because of Israel’s trade in arms with dozens of countries, including the UK.

Banks and financial institutions – like Barclays Bank, with high street branches across the UK, facilitate this trade through their investments in, and provision of financial services to, arms companies that provide Israel with weapons and military technology.

Our research has uncovered that Barclays Bank provides hundreds of millions of pounds worth of investment, loans, and other financial services to companies supplying Israel with military technology used in the repression of Palestinians – including investments in Israeli arms manufacturer, Elbit Systems. Elbit Systems specialises in the production of military technology, surveillance systems, and military drones – used to brutalise Palestinians in Israel’s repeated bombardments of the Gaza Strip. Barclays is therefore aiding, and directly profiting from Israel’s occupation and apartheid regime.

Join this event to find out more about Israel’s repression of Palestinians struggling for liberation. Learn more about we can take action to demand Barclays end their complicity in injustice.

Hosted by Palestine Solidarity Campaign, War on Want, and Campaign Against Arms Trade.