Home / Events / From Balfour to the Nakba Public Meeting

From Balfour to the Nakba Public Meeting 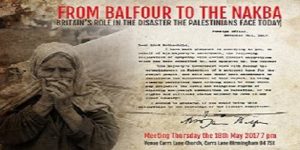 Speakers include Bernard Regan whose book The Balfour Declaration Empire the Mandate and Resistance in Palestine examines the hundred year history which saw the creation of the state of Israel, the Nakba and the dispossession and occupation of Palestine.

Bernard will be joined by Kamel Hawwash who was refused entry to his own country by the occupying forces. He was forcefully separated from his family. They were returning to Jerusalem to spend the Easter break. Kamel’s both parents were born in Jerusalem. Many of his family still live in the city. Now he faces the prospect of not seeing some of his elderly relatives. Kamel Hawwash plays a very active part in campaigning for the Palestinian rights.