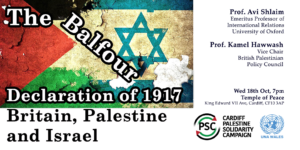 The 100th anniversary of the controversial Balfour Declaration is soon to be marked in Cardiff by expert presentations on its legacy for Palestine and Israel. They will focus on current issues triggered by Britain’s role in the Middle East.

Historian and author Avi Shlaim is Emeritus Professor of International Relations in the University of Oxford, and a fellow of the British Academy. He was born into a Jewish family in Baghdad and has lived in Israel. His wife is a great granddaughter of David Lloyd George who was the Prime Minister when, in 1917, the British Government first endorsed the idea of a Jewish homeland in Palestine.

Professor Kamel Hawwash of Birmingham University, is a Palestinian commentator on the Middle East. His parents were born in Jerusalem and members of his family still live in East Jerusalem and the West Bank, areas conquered and occupied by the Israeli army in 1967. Prof. Hawwash was recently prevented from visiting his family when the Israeli authorities refused him entry at Tel Aviv airport because of his opposition to Israeli policies and breaches of international law, and his support for the peaceful Boycott, Divestment and Sanctions (BDS) campaign.

This public meeting has been jointly organised by the Cardiff branches of the United Nations Association and the Palestine Solidarity Campaign.