Join the Apartheid Off Campus – National Day of Action

On the UN Solidarity Day with Palestine (29th November), 30 student groups will take action on their campus as part of a National Day of Action. This is part of our ongoing response to the call from the Palestinian civil society in 2005 for the international community to Boycott, Divest and Sanction (BDS) Israel as a non-violent means to pressure Israel into complying with international law and the basic principles of human rights. It follows the agreement from students to take collective action to calling for Apartheid Off Campus, which was decided at the BDS Student Conference on the 1st and 2nd September 2018. 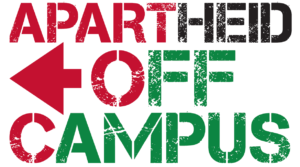 UK universities remain deeply complicit with Israel’s apartheid regime through their investment and institutional links, despite many holding “social responsibility policies”. These policies often include restrictions on investing in companies who conduct business which leads to human rights violations. One example includes University of Manchester, who invest millions in the company Caterpillar. Caterpillar supplies the armoured bulldozers for the Israeli army to demolish Palestinian homes, schools olive groves and communities.

This call comes at a time where international solidarity is needed more than ever for the Palestinian people. Since the 30th March, Palestinians in Gaza have been marching to demand their basic rights to freedom. In response, Israel is meeting the protests with live fire, massacring over 180 Palestinians to date. Most recently, on the 28th September, 6 Palestinians were killed, including 2 children.

In the West Bank the Palestinian village of Khan Al-Ahmar is due to be demolished by Israel, in order to build the ever expanding illegal Israeli Jewish-only settlements. This is another extension of Israel’s apartheid regime and continued ethnic cleansing of the Palestinian people.

Students in the UK have been at the forefront of BDS campaigning for years. Palestinians need our solidarity to accelerate the BDS campaign, to hold Israel accountable for its war crimes, and to hold UK universities to account for their complicity.

Join the Apartheid Off Campus – National Day of Action here!

Click here for more info on the Apartheid Off Campus campaign