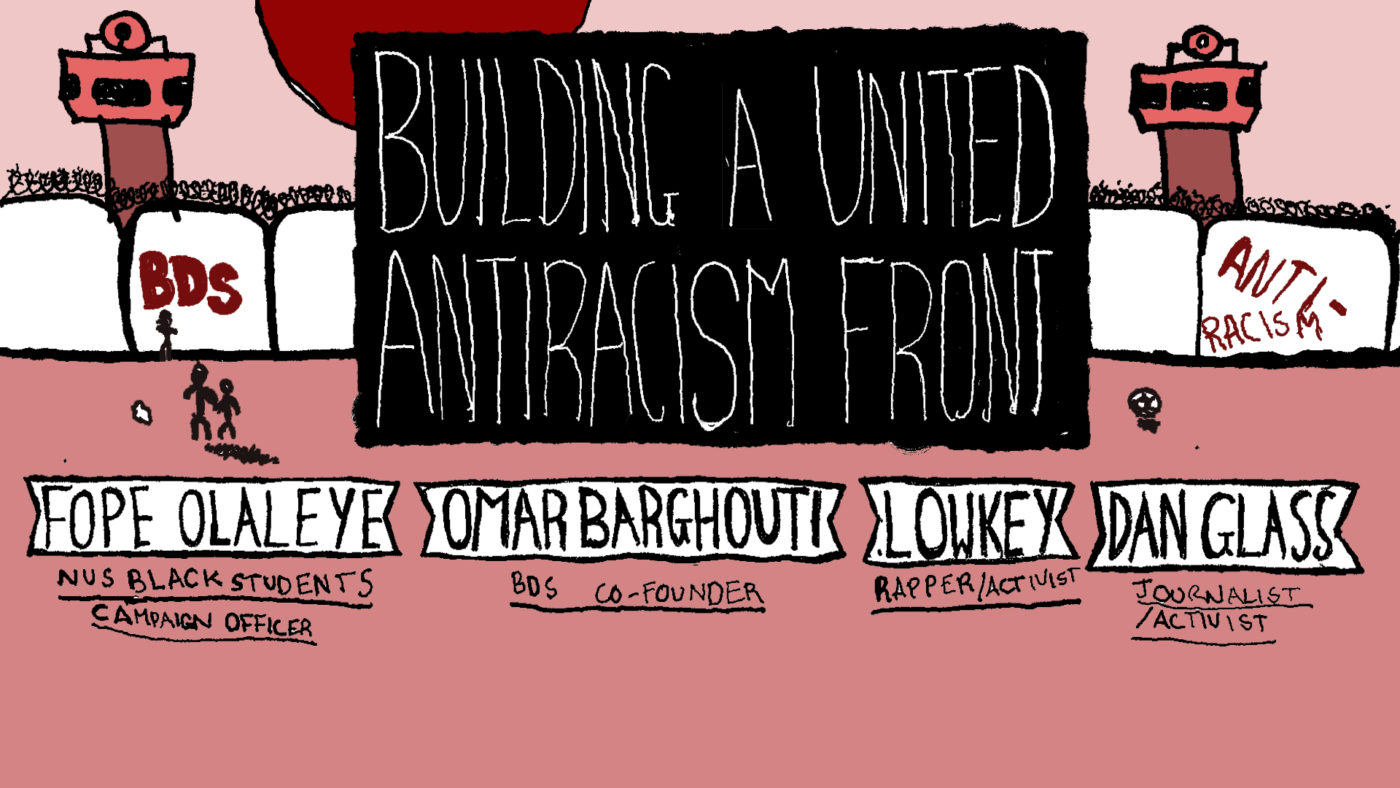 History has shown us that when movements for justice unite to take on oppressive forces, we can and will win. Liberatory struggles must work together against institutional racism and oppression, and for our fundamental rights to protest.
The struggle for justice in Palestine is a struggle against an institutionalised discriminatory framework of power which meets the legal definition of apartheid. This is the lived experience of Palestinians whether those living under illegal military occupation in the West Bank, East Jerusalem or Gaza, as second class citizens in the state of Israel, or as refugees denied the right of return.
The Palestinian call for Boycott Divestment and Sanctions (BDS) is a call for global resistance to apartheid rooted in the affirmation that challenging Israel’s system of racism and discrimination is a crucial component of a universal anti-racist struggle.
This event will look at how we withstand attempts to delegitimise BDS and wider activism for Palestine as a united movement, and how we build widespread support for an end to institutional racism. A crucial part of this is pushing for UK universities to end their investments and institutional links to Israeli apartheid, the extent of which has been revealed by PSC’s online database: palestinecampaign.org/university-complicity-database/
Time to get #ApartheidOffCampus!
Speakers include:
Omar Barghouti
Omar Barghouti is a prominent Palestinian human rights activist and co-founder of the Boycott, Divestment and Sanctions (BDS) movement. The Palestinian-led BDS movement is a peaceful, global human rights movement that urges the use of economic and cultural boycotts to end Israeli violations of Palestinian human rights and international law. It has recently been nominated for a Nobel Peace prize.
Lowkey
Lowkey is widely regarded as one of UK hip-hop’s finest, his socially conscious approach sets him apart from his contemporaries. After a hiatus which saw the hip hop artist take time off to focus on studies and activism, he has returned to a different world politically and a country and in a state of flux. He uses his new album to shine a light on the inner workings global power structures, multinationals and their relationships with governments.
Fope Olaleye
Fope Olaleye is the NUS Black Students’ Officer. They are a Politics graduate from Newcastle University and Anti-Oppression facilator and educator. They focus primarily on on decolonial practice and the experiences of Black Women and QTIPOC. They have been featured in Dazed, i_D, BBC Radio 1xtra and are a regular guest speaker at universities across the country leading workshops on what decolonisation means for gender and education.
Dan Glass
Dan is a sex-positive, queer, healthcare and human rights award-winning activist, performer, presenter and writer. Dan has won Attitude Magazine’s campaigning role models for LGBTQI youth + a Guardian ‘UK youth climate leader’, 2017 ‘Activist of the Year’ with the ‘Sexual Freedom Awards’ and was announced a ‘BBC Greater Londoner’ in 2019 for founding ‘Queer Tours of London – A Mince Through Time’. An agitator from the Training for Transformation educational programme born out of the Anti-Apartheid movement, the core of dan’s work is the development of critical consciousness and creativity to spur people ‘to read their reality and write their own history’.