2 years on from the start of the Great Return March, take action in your community against Israel’s violations of international law and in support of the rights of the Palestinian people!

Global solidarity with Palestine could not be more vital at a time when attacks on the core collective rights of the Palestinian people, as stipulated in international law, are being intensified by Israel and its allies.

Donald Trump’s so-called “deal of the century” represents not a deal for peace but a demand to the Palestinian people to surrender their rights. It reflects the vision that Israel has sought to map out on the ground for decades – no viable state for the Palestinians but a series of Bantustans, no capital in Jerusalem, instead sovereignty over the outlying districts of East Jerusalem, and no right of return for the Palestinian refugees.

Meanwhile, Israel has killed more than 250 Palestinian protesters and injured a further 30000 since the start of the Great Return March in Gaza. These ongoing protests, taking place every single Friday, have seen thousands of Palestinians fighting for their right of return to their villages and homes from which they were forcibly removed. Israel’s unlawful killing of protesters – including women, children, journalists and medics – have been marked as potential war crimes by the UN.

As well as marking 2 years since the start of the Great Return March, March 30th is also Palestinian Land Day – when Palestinians across the world remember the unarmed protesters killed by Israel in 1976 during demonstrations about Israel’s theft of Palestinian land.

The Palestinian people refuse to give up their struggle for justice. It is our task to draw inspiration from their endurance and answer their call for international solidarity.

So get involved in the nationwide day of action on Saturday 28th March to show support for the Palestinian people’s fundamental rights to exist, resist and return. 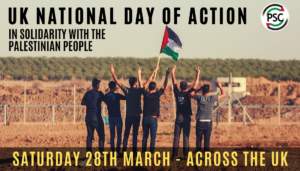