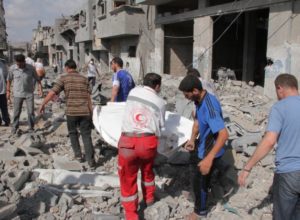 “It was the first time for me, being in an ambulance, moving so fast. … I was scared. I was nervous. I couldn’t focus. I could only press the RECORD button on the camera. The camera was my friend throughout the war.”

August 2017 will mark the third anniversary of the bombing of Gaza. Ambulance is a raw, first-person account of the bombing of Gaza in July 2014. We experience the war through Mohamed’s eyes, watching directly from the passenger seat of an ambulance, as he comes of age among dead bodies, terrified families, and the constant risk of sudden death. Ambulance is a film that rises above the ‘noise’, of the international media. A film that expresses both the trauma and hope of the too-often invisible citizens of Gaza. (80mins, Arabic/English)

The screening will be followed by a Q&A with Norma Turner, Chair of Manchester PSC and retired nurse who has worked in Gaza with the Red Crescent Society.