Over 30,000 emails have been sent to football clubs across the UK calling on them to #BoycottPuma until they end their complicity in Israeli war crimes. PSC launched a targeted online campaign to pressure Chester FC not to renew their kit deal with Puma, which generated over a million twitter impressions. Chester FC’s co-owner has since responded to say Puma will be dropped at the end of this season.

“We’d like to thank the thousands of people who emailed Chester FC and took to twitter over the weekend. The response we received shows our campaign is gaining momentum, and that UK clubs are feeling the heat to #BoycottPuma.”

Chester FC is yet to officially announce who will provide their next kit, but their choice comes amidst a growing international campaign for sports teams to boycott Puma over their support of illegal Israeli settlements.

Puma remains the main sponsor of the Israel Football Association (IFA), which includes football clubs based in Israeli settlements on stolen Palestinian land. All settlements are considered war crimes under international law. As one of the world’s top athletic apparel makers, Puma’s sponsorship brings international legitimacy to the IFA and helps maintain its direct involvement in supporting illegal settlements. Over 200 Palestinian teams have called on Puma to end its support for Israel’s military occupation by terminating its sponsorship deal with the IFA – but Puma has ignored these requests.

PSC is seeking an official statement from Chester FC confirming that they will not renew their contract with Puma. For more information about the #BoycottPuma campaign and to write to UK football clubs see https://www.palestinecampaign.org/campaigns/puma/ 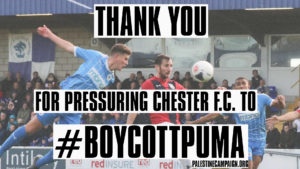