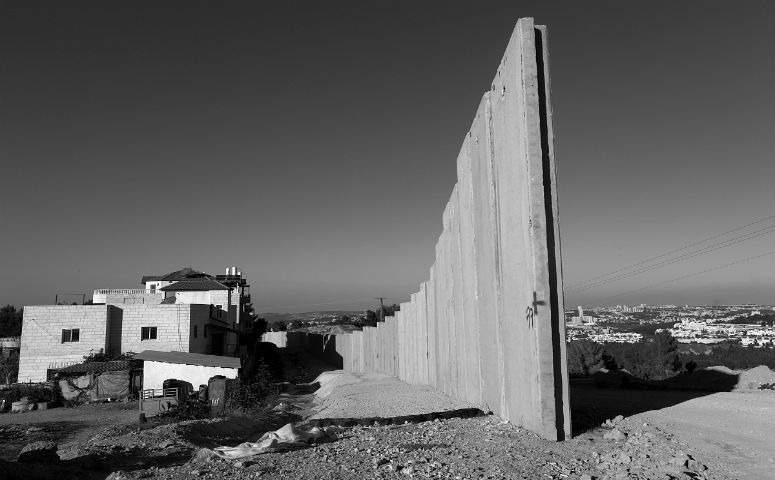 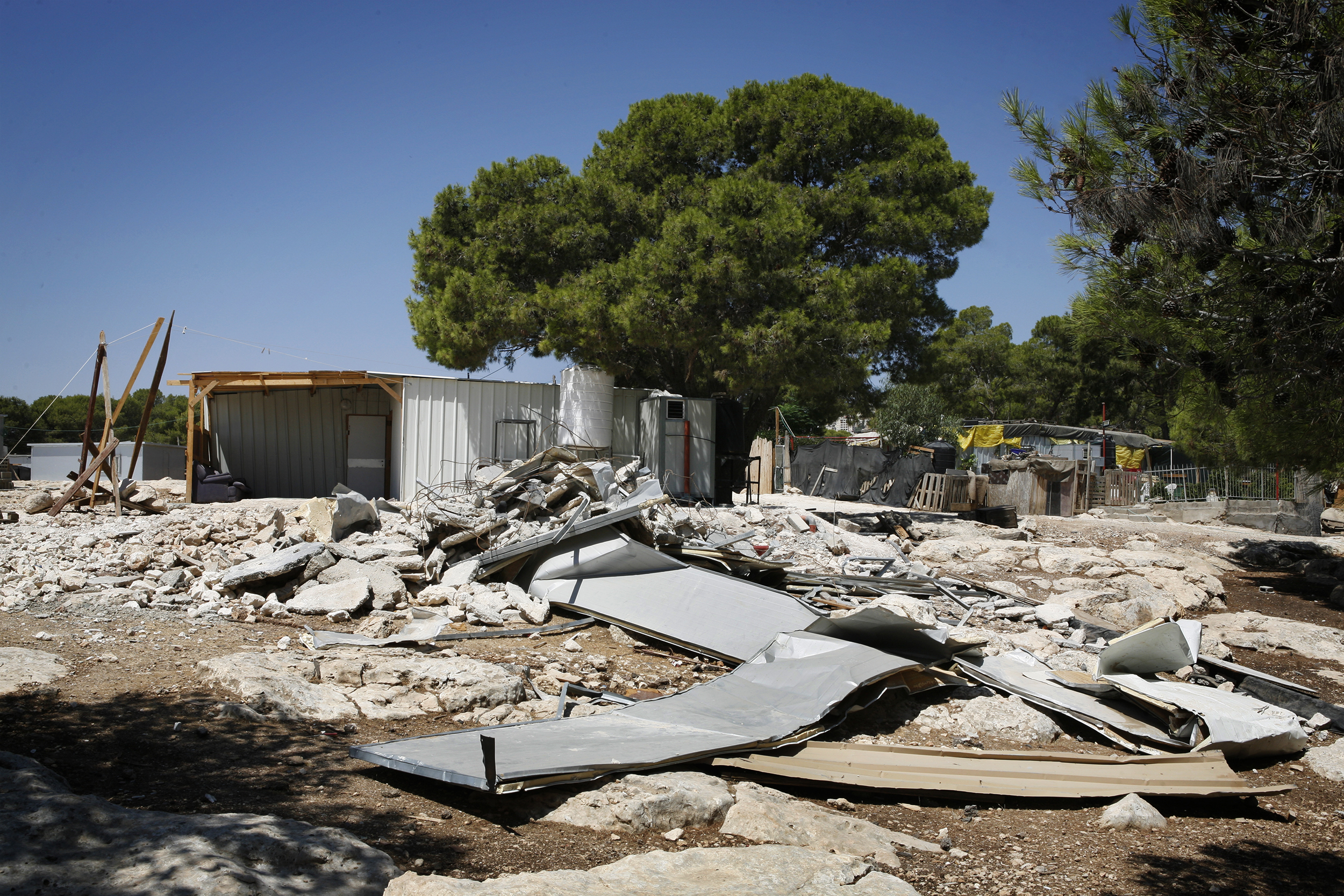 The Palestinian village of Khan al-Ahmar is now facing imminent demolition. It is one of 46 Palestinian communities in central West Bank that Israel wants to forcibly transfer to make way for illegal Jewish-only settlements. Please send a message to the Foreign Office now

Settlements are not a victimless crime

Israeli settlements are villages, towns and cities built illegally on Palestinian land. With the continual building of more and more settlements Israel is building Palestine out of existence.

The UK Government calls Israeli settlements illegal and a barrier to peace. And yet in spite of their words, they have taken no action. We are campaigning, with partners in Palestine and the UK, to demand the UK government takes decisive and effective action against Israel in order to stop the continual building of illegal settlements. 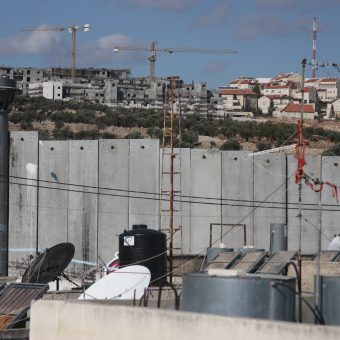 The Frontline of Israel’s Settlement Regime by Salah Ajarma 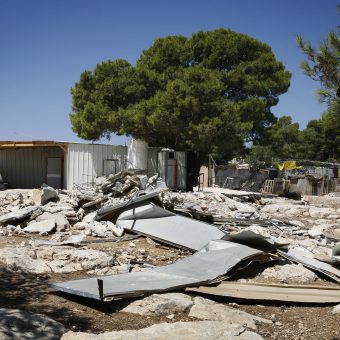 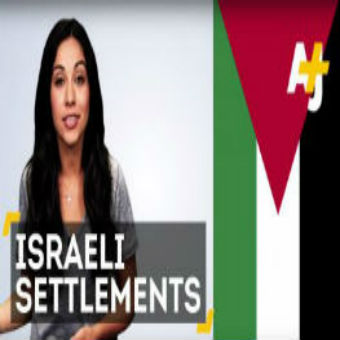 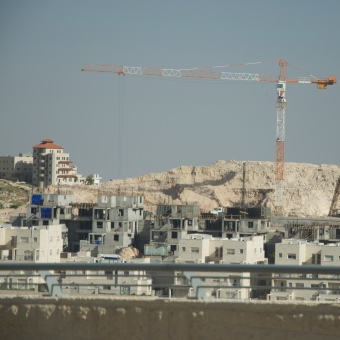 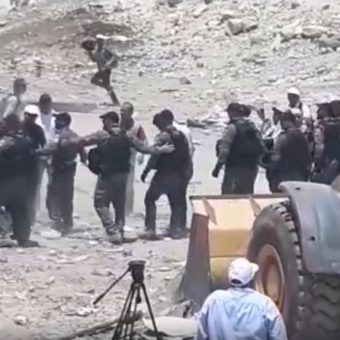 What are Israeli Settlements?

Palestinians and Israelis live under separate legal systems, with Palestinians subject to military, rather than civilian law.

Settlements are one of the clearest examples of Israel’s unwillingness to abide by international law. Also,by preventing the creation of a Palestinian state, they help delay any possibility of a just peace in Palestine.

Altogether there are some 547,000 settlers in East Jerusalem and the West Bank.

What are the consequences of Israeli settlements?

Although the building of Israeli homes and communities sounds innocuous, in reality, their construction causes great suffering to Palestinians. Settlements are one part of a broader system of military occupation and colonial rule. Israel’s military occupation is colonial because it denies Palestinians the right to rule themselves democratically and to collectively determine their future. The settlements, and the military occupation that supports and facilitates their growth, are illegal, a barrier to peace and have a profound negative impact on the daily life of Palestinians.

Israel's Separation Wall and the Infrastructure of Occupation
To ensure that Palestinians are excluded from settlements, and to maintain Israeli control, Israel does its best to separate Palestinians from Israelis. This includes physical barriers, such as the wall – Israel’s 25ft high concrete barrier which runs through the West Bank – as well as checkpoints, roadblocks and a segregated road system. This makes normal life for Palestinians impossible as they cannot freely travel from one town to the next. Israel also practices legal segregation by applying different laws to Israelis and Palestinians. Israel’s practice of separating one racial group from another for the purpose of domination constitutes the crime of Apartheid under international law.
Illegal
According to international law, Israel’s occupation and settlement construction is illegal. Under the Geneva Convention – the main standard on which international law is based – it is considered illegal for an occupying country to “deport or transfer parts of its own civilian population into the territory it occupies.” To do so is considered a war crime. The illegality of Israel’s occupation and settlement construction has been reaffirmed by numerous UN resolutions, the International Committee for the Red Cross and a 2004 International Court of Justice ruling.
Barrier to a just peace
Settlement construction is particularly focused on areas that Israel wants to permanently acquire and where they believe settlements can prevent Palestinians from establishing a viable state. Moving thousands of Israelis deep into occupied Palestinian land is an attempt by Israel to claim areas of Palestinian land and, eventually, to expand its borders by annexing these settlement areas. Settlements are a barrier to peace, therefore, because they make it impossible for Palestinians to establish their own state.
Violence and ethnic cleansing
Settlement construction requires land on which to build these villages, towns and cities which are exclusively for Israelis. To get this land, Israeli soldiers and settlers engage in violence against Palestinians in order to encourage them to leave their homes. The rate of home demolitions has significantly increased in 2016, with 726 Palestinian structures demolished by Israel in the first 7 months of the year, a number which has well surpassed the figures for the whole of 2015 . There are frequent physical attacks by Israeli settlers and soldiers on Palestinians of all ages, often resulting in serious injury and death. Roadblocks are set up, windows smashed, crops destroyed and houses, cars and mosques are burnt. Between January and April 2016, 63 Palestinians, including 19 children, were killed and 1,710 Palestinians and injured throughout occupied Palestine . This is typical of the scale of violence faced by Palestinians.

What is the UK's position?

Whilst the UK Government recognises Israeli settlements to be “illegal and a barrier to peace”, the UK continues to provide substantial support to settlements. Much of the Israeli agricultural produce sold in the UK is grown in illegal Israeli settlements and benefits from preferential trade agreements with the UK. Meanwhile, companies and charities registered in the UK do business in settlements, sending money in support of projects that expand and entrench Israeli domination.

It is time to bring the UK’s policy in line with its objectives. A number of prominent organisations have called on the UK Government to implement a ban on settlement produce and take measures to end the UK’s complicity with settlements.

There are approximately 137 Israeli settlements and a further 100 'settlement outposts'.

What are we doing about this and how can you get involved?

We are campaigning, with partners in Palestine and the UK, to demand the UK government takes decisive and effective action against Israel in order to stop the continual building of illegal settlements. We are talking to politicians and building alliances, and asking you to do the same. So far, over eight thousand of you have written to your MPs asking for them to take action to stop the demolition of two Palestinian villages. We will be updating this page with actions you can take as the campaign develops so look out for new ways to get involved, if you haven’t already, you can sign up to our mailing list to make sure you stay up to date.

We are also taking on the companies from the occupation, such as Hewlett Packard (HP), one of the main suppliers of IT systems equipment and services to the Israeli military and security sectors, and to some settlements. We have set up a Stop HP website with information about why you should boycott HP, updates on the campaign and an activist toolkit to help you with your campaigning.

There are plenty of other ways you can get involved including, but not limited to: 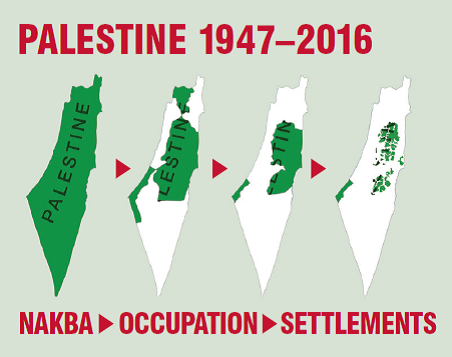