This Ramadan: In Solidarity with Palestine – Boycott Israeli Dates 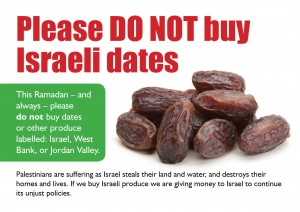 Ramadan is a time of year when we remember those who are less fortunate than ourselves. When we break our fasts with dates, it would be an affront to us all if the dates were the produce of illegal Israeli settlements built on land stolen from Palestinians.

Israeli produced Medjoul dates are grown in the Jordan Valley within illegal Israeli settlements. They form a large part of the agricultural produce from these settlements which are then exported all over the world. Buying these dates means that you are actually helping Israeli settlers steal Palestinian land.

Israelis claim Palestinians are given jobs working on the land of these settlers and a boycott will harm them. In actual fact, these Palestinians are employed for paltry wages, to do the back-breaking work that the Israeli settlers will not do themselves.

Settlers exploit Palestinian children, who are forced to miss out on their education and work long hours under the hot baking sun for small sums of money. The price of settlement produced dates are cheaper compared to those produced by Palestinian farmers as a result.

Check the label. Do not buy dates that come from: Israel, West Bank or Jordan Valley.

Profiting from the occupation

Dates have been Israel’s leading fruit export and account for about 15% of export from Israel into the EU.  It is estimated that Israel produces over 10,000 tonnes of dates per year and the total income for Israel from dates in a year is approximately £80 million – and a vast majority of which are sold during Ramadan.

Join PSC in their campaign to urge shoppers not to buy Israeli dates.

It is important that the campaign to boycott Israeli dates begins now. The earlier we start the less wholesalers will buy the dates in to supply them to shops and the less shops will stock them to supply to consumers. Please see below the actions you can take:

– Write to your local wholesalers.

– Write to and visit your local shop managers, using the points raised in the letter.

– Contact us for more information and to link up with activist groups around the country.

PSC  has produced a new postcard urging Muslims not to open their fast with Israeli dates – and strengthen the occupation – during the month of Ramadan.

Order the new card now from the PSC office! 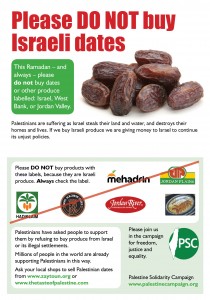