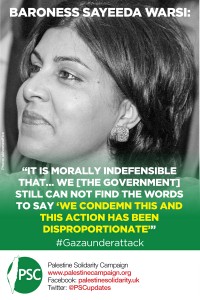 Baroness Warsi (Conservative) spoke in the Middle East and North Africa debate in the House of Lords on 30 October 2014. There she launched a stinging rebuke on the Government’s policy on Palestine.

” My Lords, I thank my noble friend Lord Risby for calling this debate at what is a timely moment to assess the situation in the Middle East and north Africa. These debates are an opportunity to highlight the actions of countries and regimes around the world but, more importantly, they present an opportunity to explain, test and challenge our country’s response to those actions. It is that that I will seek to do today.

Our policy in relation to the Middle East peace process, which I am sure my noble friend will repeat today, is simply this: a two-state solution; a negotiated settlement; a safe and secure Israel alongside a viable and sovereign Palestinian state, based on 1967 borders, with agreed land swaps and Jerusalem as the shared capital; and a just and fair settlement for refugees. But I would say that our policy is simply not working; that it is flawed; that different strands of our policy are simply not viable and no longer hold true; that in fact we know our policy is not working yet we continue to stick to it; that our policy is not responding to the reality on the ground yet we fail to change it; and that this approach damages our reputation both at home and abroad, and sadly makes us no longer an honest broker.

In 2012 we asked the Palestinian President Mahmoud Abbas not to move towards a resolution at the UN General Assembly. We made it clear that this was for the time being and that it would be better to give the US Administration the opportunity to set out a new initiative and move towards a successful Middle East peace process. The Kerry talks were on the horizon, and I commend Secretary Kerry for his efforts and the failure of those talks certainly cannot be laid at his feet. At that time we said that 2013 was going to be a crucial year, and I said so many times at that very Dispatch Box. The then Foreign Secretary said:

“If progress on negotiations is not made next year”—

He was right. We said at that time that we may have considered supporting the Palestinian resolution at the UN if it supported a negotiated peace process. Israel made it very clear that if the Palestinians went to the UN, it would no longer negotiate. Therefore, if that was the case and we knew that that was the case, by putting that condition in place, we were effectively giving Israel a veto. My question to the Minister, therefore, is: what is our policy now?

I turn now to the issue of illegal settlements. We condemn them. We say that they threaten the very viability of a two-state solution. But what consequences ever follow from that condemnation? The 1967 borders of the West Bank, Gaza and Jerusalem are not lawfully part of the state of Israel. That is agreed. It is the settled policy of successive Governments. A line was drawn in international law which, ever year, is violated by Israel. The settlement building continues apace. Even during the Kerry discussions, new housing start-ups in the West Bank rose by 120%.

In 1993, at the time of the Oslo peace accords and the peace process, the number of settlers in the West Bank, not including Jerusalem, was 110,000; today, the number is 382,000. Israel’s Housing Minister, himself a settler, said earlier this year that he wanted that number to grow by 50% over the next five years. As my right honourable friend Sir Alan Duncan has said, settlements are simply “an act of theft”, initiated and supported by the State of Israel. The strategic planning, including the announcements on the E1 plan and other building programmes, display an even more dangerous intent. They create enclaves of Palestinians cut off from each other; cut off from their future capital and cut off from a viable existence. It is an organised and planned strangulation of what we call the two-state solution.

Another part of our policy is a just and fair settlement for the refugees. Across all parties in our country, there is a strong consensus and support for international justice and for the ICC. However, we continue to take the position that ICC membership makes negotiations impossible. Why do we say that negotiations would be impossible if the Palestinians went to the ICC? Is it because Israel does not wish to be held accountable for any war crimes that may have been committed; or is it because we, who oppose immunity for such crimes elsewhere, are prepared to make an exception in this particular case?

If we are not prepared to pursue justice for those who are suffering now, how can we be trusted to fulfil our commitment to pursue justice for those who suffered and lost many decades ago? The policy simply no longer holds true. The situation on the ground has so changed—and continues to do so—that what we say we seek is unlikely to be achieved. We say we have a position. We condemn, but the actions in respect of that condemnation are not there to be seen and no consequences follow. We take certain positions—for example, on language during the Gaza crisis and at the Human Rights Council of July 2014, when a commission of inquiry was proposed for human rights violations during the Gaza crisis. We take those positions as a way of preserving and promoting our relationship with Israel because we sincerely believe that we want to influence change. We prefer private to public diplomacy—I agree with that—but I fail to see those tough private conversations.

Therefore I ask the Minister the following questions. In July 2010 my right honourable friend the Prime Minister said that,

“Gaza cannot and must not be allowed to remain a prison camp”.

What has changed in Gaza since then? What influence have we been able to exert as a result of not supporting the Palestinians at the United Nations? In the light of the parliamentary vote in the Commons and the lack of any negotiations, will the Government move to a position of recognition? In doing so—with reference to that debate in the House of Commons—will the Government distance themselves from the comments of the Chancellor’s PPS, Robert Halfon, who said that,

If we are not prepared to move to a recognition of Palestine, can we lay out the specific conditions that will need to be met? Will the Government set out a pathway in the interests of transparency? What consequences have flowed from the strong condemnation by the Foreign Secretary in September and October of this year of the recent settlement announcements? How have we, since the Gaza conflict, used the so-called influence and capital we built up during that conflict with the Israeli Government to change their position since then?

It was because of the concerns that I have raised today—and not, as some have disturbingly tried to suggest, because I am a Muslim—that, as the then Minister with responsibility for the UN, the ICC and human rights, I concluded that I could no longer defend our policy at that Dispatch Box. Our current position on this issue is morally indefensible. It is not in Britain’s national interests and it will have a long-term detrimental impact on our reputation, internationally and domestically. It is time for us to start to be on the right side of history.”