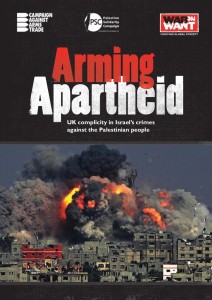 Over 2,000 Palestinians in Gaza were brutally killed by Israel last summer. This is only the most recent example of Israel’s indiscriminate acts of violence against the Palestinian people. Now Palestinians want us to stand with them to help secure lasting peace.

This report is being published just before the first anniversary of the war on Gaza, a timely reminder of why we need to press for action to end the arms trade with Israel.

Despite the horror and bloodshed, UK-made weapons and military technologies continue to be sold to and used by the occupying Israeli forces.

Join us in calling for an immediate two-way  arms embargo to end all arms sales to and purchases from Israel.

Act Now to Stop Arming Israel: Join the call for an immediate two-way arms embargo on the arms trade with Israel