Activism in April & new supporter survey – prizes to be won!

Palestine is, as ever, a live issue. With new developments tumbling in thick and fast every single day, we must push forward with our campaigning. But it’s also necessary to note the progress that has been made. In your new monthly update, we’ll be bringing you all the latest in campaign & media news, as well as the events for the month ahead. We hope this new monthly mail will help keep you more informed and engaged than ever before – and keep our spirits high as we campaign for justice for the Palestinian people.

We know too well that our freedom is incomplete without the freedom of the Palestinians.’ – Nelson Mandela, 1997.

This is the principle of solidarity that underpins all our work. This quote inspires us and keeps us going. We hope it does the same for you. 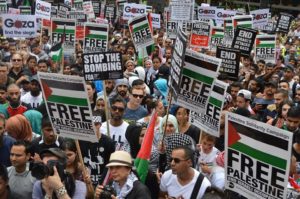 Supporter survey –prizes to be won!

PSC is at its core a mass movement. The work we do is dependent on the backing of our supporters, from volunteers at rallies to people sharing our message on social media. To continue to fight for freedom and justice in Palestine and to bring these issues to the forefront in the UK we need to grow. To do this, we need to know what you think of our work! Please take five minutes of your time to complete this survey and give us your feedback on how we communicate with you, our campaigns and the direction you think PSC should take. If you are kind enough to fill out the survey, you can also be entered into a draw to win badges, pins, keffiyehs from Hebron, and copies of the new book ‘This Is Not a Border’ – an anthology of Reflection from the Palestine Festival of Literature! 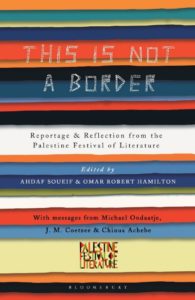 Hunger Strikers – On Monday 17 April (Prisoners Day), over 1,500 Palestinian prisoners held across jails in Israel began a historic hunger strike under the leadership of Marwan Barghouti. Solidarity in Palestine and across the world has been overwhelming. Their demands are simple – respect our human rights. We’re calling on the FCO to urgently raise the issue with Israel, to end its violations of international law and human rights conventions in the treatment of Palestinian prisoners. You can write to the FCO and make your voice heard here. We are calling for a day of national action and vigils on 6 May – more details on the website.

Settlements / General election –The snap Election call has taken everyone by surprise .  We had been working with partners in Parliament on an Early Day Motion (EDM) calling for a settlements goods ban in response to the Israeli government’s announcement of the first new settlement in the West Bank for 20 years. Several MPs had already signed up. The EDM now won’t be discussed until the new Parliament sits – but as soon as it does, we’ll be making sure the EDM gets the attention it deserves. Until then, we’re working to give you all the tools you need to make sure you #VotePalestine. We will be working on a mechanism to contact as many candidates as we can in as many  constituencies to declare their views on Palestine and what they will do to support human rights. We’ll be collating those responses and uploading them onto a dedicated ‘General Election’ tab on the website. The ‘General Election’ tab will contain all the tools you need to make an informed decision on your vote for Palestine. 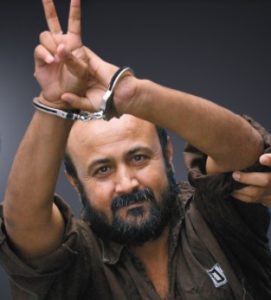 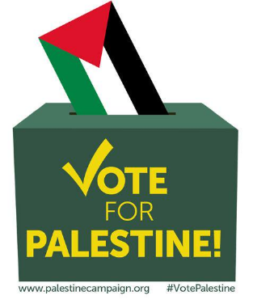 Challenging the conflation of criticism of Israeli state policy and antisemitism – In December 2016, the government adopted a definition of antisemitism that includes criticism of the state of Israel in the guidance of application. PSC, Jews for Justice for Palestinians, Independent Jewish Voices and Free Speech of Israel have obtained a legal opinion that definitively finds that “Describing Israel as a state enacting a policy of apartheid, as practising settler colonialism or calling for policies of boycott divestment or sanctions against Israel cannot properly be characterized as antisemitic.” Furthermore, the legal counsel finds that the definition’s poor drafting means public bodies applying the definition could be at serious risk of “unlawfully restricting legitimate expressions of political opinion”. PSC & partners are now advising local authorities, universities and other public bodies of the legal opinion and reminding them of their duty to uphold freedom of expression.

Judicial Review and Fighting Fund – Last year, the government brought in measures to stop local council pension schemes divesting from companies complicit in Israel’s human rights violations. Theresa May’s government thought they could just announce regulations to stop councils taking the ethical decision to divest from companies complicit in Israel’s human rights violations, but they were wrong. We are taking the government to court to protect our right to boycott this summer – but we need money to pay for the best legal defence available. Will you help protect the right to boycott and donate a few pounds to the fighting fund?

FIFA – The Palestinian Campaign for the Academic and Cultural Boycott of Israel (PACBI) and Red Card Israeli Racism are campaigning to make sure that the seven illegal settlement football clubs that participate in the national Israeli football league have their affiliation revoked – or face suspension from FIFA! You can help by writing to FIFA’s council members here.

Umm al-Hiran – Following the attack and home demolitions in the Bedouin village of Umm al-Hiran in January, the Israeli authorities have now issued demolition orders to additional homes in the village. Please take a minute to call for the demolitions in Umm al-Hiran to be stopped, and for the entire plan to demolish the village and expel its residents to be immediately cancelled. Sign the petition here.

Radiohead – Radiohead are planning to play a gig in Tel Aviv on 19 July. Sign the petition and tell Radiohead not to endorse inequality and apartheid!

9 May – Talk: ‘The Violation of Palestinian Rights’ with Salma Karmi-Ayyoub

9 May – Oxford – In the Shadow of Balfour

12 May – Nakba week all events nationwide: From Balfour to Nakba

14 May – The Balfour Declaration: 100 years of betrayal of the Palestinian People

15 May – Film Screening: Firefighters under Occupation

In solidarity, The PSC team