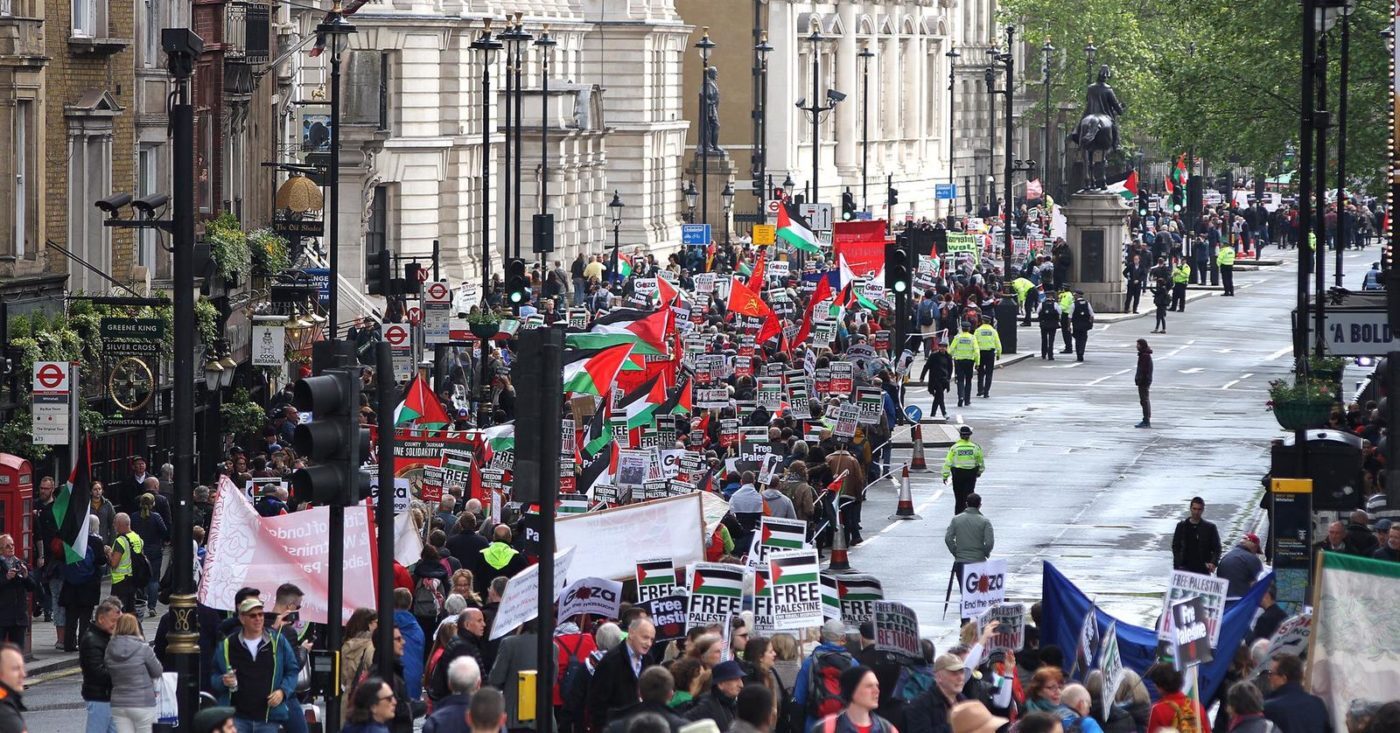 Palestine Solidarity Campaign (PSC) is a community of people working together for peace, equality, and justice and against racism, occupation, and colonisation.

Together we are the biggest organisation in the UK dedicated to securing Palestinian human rights.

PSC brings people from all walks of life together to campaign for Palestinian rights and freedom.

We are united in our belief that Israel’s flouting of international law, continued military occupation of Palestine, and systematic discrimination against Palestinians is unacceptable; so together we are taking action.

We are taking on corporations that profit from the occupation, our government that still refuses to hold Israel to account, and the media that does not report the truth. And we are building a mass movement for Palestine in the UK.

We believe in people power. The more of us standing together, raising the call for justice and equality, the louder our voice. We know that united we can take on the might of governments, corporations, and the media – and we can win.

What does PSC believe?

Palestinians should have the same rights and freedoms as anyone else.
But right now they don’t.

We believe no one should have their rights denied or be treated differently because of their ethnicity or religion. But this is happening to the Palestinian people at the hands of the Israeli government right now.

We believe there can be a peaceful and just end to the decades of occupation and oppression, one that respects the rights and dignity of Palestinians and Israelis. But until this happens, we have a responsibility to stand up for Palestinian rights.

We believe that change in the UK can affect change in Palestine. The Israeli occupation can only survive as long as the international community supports it. As a key ally of Israel the UK is well placed to have a significant impact.

We believe that when people stand together we have the power to change the course of history. So we are building a mass movement for Palestine, with people from all walks of life. Together we are standing up to our government, big business, and the media making it clear that occupation, the flouting of international law, and state-sanctioned discrimination are not acceptable.

What are PSC's aims?
PSC campaigns for an end to the Israeli occupation of Palestine and for peace and justice for everyone living in the region.

Specifically PSC was established to campaign:

Where does your money come from?
PSC is powered by donations from our members and supporters, without which we simply wouldn’t exist. We ask our supporters to donate to our work so that we can keep campaigning for as long as we need to.

We don’t accept money from governments, political parties, or big businesses so we are truly independent in our campaigning.

We are not a charity. As a political campaign we are not eligible for the financial benefits charitable status brings, which makes it even harder to raise our funds. However, political campaigning is vital to help bringing about a solution, so Palestinians can determine their own future and no longer rely on international aid or charitable support.

What do you spend your money on?
Campaigns cost money – lobbying politicians, challenging government policy, holding the media to account, taking on corporations, and building a mass movement can’t be done for free.

The majority of our funds are spent directly on our campaigns: organising protests, meetings, lobbies, and vigils; and paying for technology, leaflets, equipment, our office, and small staff team.

As a grassroots organisation, every donation we receive makes a big difference to what we are able to do.

We work with political parties in the UK from across the spectrum to achieve real change in UK government policy towards Palestine and Israel.

We do not support a particular political party in Palestine. We believe in democracy; it is for the Palestinian people to determine their own future. We are campaigning for Palestinian self-determination and are not involved in internal Palestinian politics.

How do you decide what to campaign on?
We are a member-led democratic organisation – so our campaigns are set by you. If you haven’t already join us today!

We are guided by our aims (see above) and all campaigns must further these aims.

How have you made a difference?
For over 30 years, PSC supporters have been at the forefront of the UK movement for Palestinian rights, and together we’ve had some incredible successes. Here are just a few:

In October 2014, the UK Parliament voted to recognise Palestine – PSC supporters sent 57,000 emails petitioning our MPs to vote, leading to the best attended back bench vote ever. We persuaded John Lewis to stop selling Soda Stream – pickets and petitions finally forced John Lewis to stop stocking their products made in illegal Israeli settlements. With BDS partners from around the world we made Veolia sell their shares in the Jerusalem light railway and G4S promise to sell off their subsidiary G4S Israel; both companies are pulling out of Israel.

Complaints from our team of volunteers have forced apology after correction from the BBC in recognition of their biased reporting. Flagship news and current affairs programmes including Today and Newsnight have breached guidelines or been forced to issue corrections.

At the 2015 General Election over 1,000 parliamentary candidates responded to over 36,000 emails asking them for their views, making Palestine the biggest foreign policy issue at the election. In 2014 during the brutal Israeli bombing of Gaza we brought over 150,000 people to the streets to protest the bombing and stand in solidarity with the people in Gaza.

We know that each of these achievements are small and alone they won’t end the occupation. But they all add up. Each victory is a step towards justice. Each victory brings us one step closer to a free Palestine.

Members of the Executive Committee guide the work of PSC between AGMs, including through a minimum of six EC meetings throughout the year.

The AGM sets campaigning priorities for the coming year through an agreed Annual Plan, which the Executive Committee oversees the implementation of.

For more information on our democratic structures, please see our Constitution.

How do I find out more about what is going on in Palestine and Israel?
There is lots of information available in our factsheets and back copies of Palestine News and in the resources section of this website. For up to date information about what is happening on the ground you can also follow us on Facebook or Twitter.

Jewish Voice for Peace (JVP) have some brilliant resources on their website including factsheets, and this guide on how to have difficult conversations with people about Israel and Palestine.

The Visualizing Palestine website has some brilliant infographics that illustrate the wide-ranging impact of Israeli colonisation on Palestinians, including the shrinking of Palestinian land, the discriminatory Israeli ID card system, and the illegal separation Wall.

There are a number of news sites that offer excellent coverage of Palestine including Middle East Monitor, Ma’an News Agency, Electronic Intifada, and Middle East Eye