In the first 12 days of 2016, at least eight Palestinians have been shot dead by Israeli Forces in the West Bank.

They include three young cousins – Ahmad Kawazba, 21, Alaa Kawazba, 17, and Muhannad Kawazba, 20 – who were fatally shot near the Gush Etzion bloc of illegal Israeli settlements north of Hebron.

The young men were killed on 7th January. A few hours later, 16-year-old Khalil al-Shalalda was shot and killed by Israeli soldiers at the Beit Einoun junction near Hebron.

On 12th January, Israeli Forces killed two more Palestinians at the same junction, including 17-year-old Adnan al-Mashni, who was shot in the chest.

On the same day, 21-year-old Srour Abu Srour from Aida refugee camp, Bethlehem, was also shot in the chest with live fire and was pronounced dead in hospital.

Since the beginning of October 2015 Israeli soldiers and illegal Israeli settlers have killed more than 150 Palestinians, mostly young men and women, but children as well.

The killing has taken place across the West Bank and in Gaza. In total more than 13,500 Palestinians were injured by Israeli Forces last year.

Among those injured this year is 12-year-old Ahmad Abu al-Hummus (pictured). Ahmad was shot in the head last week as the Israeli army invaded his suburb of East Jerusalem and fired live ammunition, gas bombs and rubber-coated steel bullets at civilians. He is now in a critical condition in hospital. 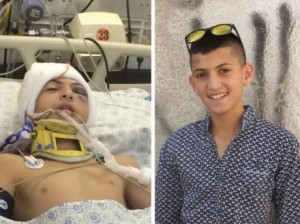 According to the United Nations, the killing of Palestinians in the West Bank by Israeli Forces hit a ten year high in 2015. And the Israeli State continues to enforce its illegal occupation as 2016 begins with the same lethal violence that terrorised Palestinians in 2015.

Take three simple steps today:
1.     Email or write to your MPs. Ask them to contact the Foreign Office on your behalf and ask what steps are being taken to protect Palestinian civilians in the West Bank and Gaza from Israeli Forces. Find your MP’s contact details here
2.      Share this article via social media and help raise awareness of the suffering of the Palestinian people under Israeli occupation. You can find the article online here
3.      Join PSC today and become part of the campaign to end Israel’s occupation and achieve freedom, justice and self-determination for the Palestinian people. Click here and find out how to join us. If you are already a member please ask a friend to join.