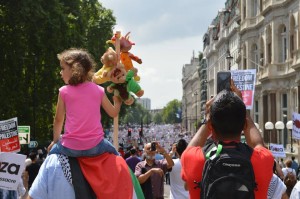 The country showed its support for Gaza on Saturday 19th July, as 100,000 people  marched through the streets of London in solidarity with the Palestinians.

Protesters gathered outside the Prime Minister’s residence at Downing Street, to hear speakers including Diane Abbott MP and Andy Slaughter MP, before marching to the gates of the Israeli embassy in Kensington.

At the embassy, the huge crowds, who blocked the roads, listened to speakers including Hugh Lanning, Chair of Palestine Solidarity Campaign, and Director Sarah Colborne, condemn Israel’s massacre in Gaza.

Jeremy Corbyn MP called for an arms embargo on Israel.

The names and ages of the Palestinian children killed by Israel in Gaza since July 8th were read out.

Protests around the country

Over the weekend, local PSC branches organised protests around the country calling for an end to Israel’s slaughter in Gaza.

On 20th July, nearly 2,000 people marched in Northampton, while protesters in Brighton brought the city centre to a standstill with a ‘die-in’ on the road.

There were also protests in Leeds, Hull and Cardiff on the 20th.

Bristol marched on the 19th, while Luton and Nottingham held protests on the 18th.